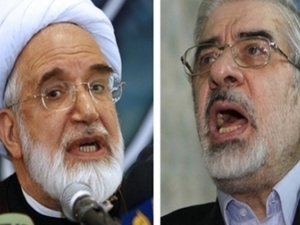 Iranian opposition leaders Mir Hossein Mousavi and Mehdi Karroubi and their wives have been arrested and put in a Tehran jail, their websites said Monday in reports swiftly denied by a judicial official.

The two had been under house arrest after judiciary chief Ayatollah Sadeq Larijani said earlier this month they had committed "treason" and MPs demanded they be hanged.

"Mir Hossein Mousavi and Mehdi Karroubi, and their wives, have been arrested and were transferred to the Heshmatiyeh prison of Tehran," Mousavi's website Kaleme.com reported.

"According to credible sources, the arrest and the transfer to jail are sure but the date when it occurred is still uncertain," Kaleme.com said.

"A judiciary source has denied the arrest of the chiefs of sedition Mousavi and Karroubi," Fars said, adding that the pair were at home and not in prison.

"They are currently in their homes and are faced only with restrictions to contact suspect elements," Fars said.

Iranian authorities had put Karroubi and Mousavi and their wives under "complete" house arrest after their supporters staged anti-government protests on February 14, their websites had said in previous reports.

Confusion over whether the pair had been arrested or not came after prosecutor general Gholam Hossein Mohseni Ejeie in statements earlier Monday warned the opposition movement against plans to hold protests on Tuesday.

"Anyone who acts against the law will be dealt with," the prosecutor general was quoted as saying on the website of state television in reference to a call for protests aimed at demanding Mousavi and Karroubi's release from house arrest.

Mousavi and Karroubi, who lost to President Mahmoud Ahmadinejad in the June 2009 election, maintain that he was fraudulently re-elected and since then have opposed his presidency.

They have led a string of protests in Iran after Ahmadinejad's re-election and their opposition to the president has shaken the Islamic regime and divided the nation's elite Shiite clergy.

On Saturday, their websites posted calls for new protests to take place on Tuesday in Tehran and other provincial cities to press for their release from house arrest.

The call was issued by the Coordination Council of the Green Path of Hope, an umbrella group backing the two leaders who steadfastly oppose Ahmadinejad's government.

The group, which called previous protests on February 14 and February 20, said that more demonstrations would be held on March 15 if Mousavi and Karroubi remained under house arrest beyond March 1.

Officials have branded anyone who supports the two men as "anti-revolutionary."

On Monday the prosecutor general said the opposition movement had now transformed itself from "sedition to anti-revolution."

Tens of thousands of regime loyalists demanded earlier this month that Mousavi and Karroubi be hanged for their rebellion, at a rally organized after Friday prayers in Tehran.

Two days later, Karroubi's website Sahamnews.org quoted him as saying that he had asked to be put on trial in public to defend the rights of the Iranian people in a letter to judiciary chief, Ayatollah Sadeq Larijani.

Organizers of the February 18 rally demanded in a declaration the "harshest punishment to the heads of sedition" and labeled Mousavi and Karroubi as "corrupt on earth" -- a crime punishable by death under Iran's penal code.

The two leaders have regularly managed to issue statements which have freshly fuelled unrest in Tehran.

Earlier this month judiciary chief Ayatollah Sadeq Larijani issued a stern warning to the two men whom he said had committed "treason", saying they had "rebelled against the religious government" and steps were being taken to block their communication networks.