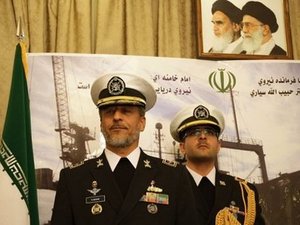 Iran's navy chief, Rear Admiral Habibollah Sayari, has said that Tehran's dispatch of two warships to the Mediterranean last week was not aggressive in aim.

"The Iranian strategy is to reinforce its defensive capacities. We do not harbor aggressive intentions against other countries," Sayari said at a press conference in Damascus on Monday.

The two Iranian warships, the first to enter the Mediterranean through the Suez Canal since 1979, docked on February 24 at the Syrian port of Latakia.

When asked if the vessels carried missiles for Hizbullah, the admiral replied: "It's a visit within the framework of international law."

Sayari also said that the two ships, on their way to Syria, had come to the aid of a Hong Kong boat that had fallen to pirates and rescued the crew.(AFP-Naharnet)