United Leave it Late to Extend Lead over City 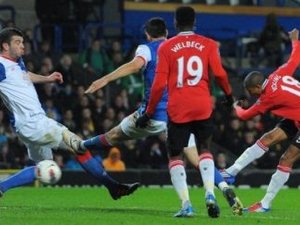 Manchester United went five points clear at the top of the Premier League after late goals by Antonio Valencia and Ashley Young sealed a 2-0 win at struggling Blackburn on Monday.

Sir Alex Ferguson's side looked set for an evening of frustration at Ewood Park as an entertaining game appeared to be heading towards a goalless draw.

But Valencia broke the deadlock in the 81st minute with a sublime finish from an acute angle before Young sealed United's 10th win in 11 top-flight games five minutes later from the edge of the area.

They will go eight points clear at the summit if they defeat QPR at Old Trafford in their next match as nearest rivals Manchester City are not in action until late Sunday afternoon.

"It was a long night we had to persevere and we got our rewards for it," said Ferguson.

"We weren't making clear cut chances, we put in a lot of great crosses but didn't finish them off.

His Rovers counterpart Steve Kean remained positive that they could avoid relegation - the result saw them drop into the bottom three virtue of a worse goal difference to QPR.

"It will go to the wire, if we take the positives from tonight and set that standard for the next seven games," he said.

"If we play like that we will pick up plenty of points."

With the title race at a critical stage, Ferguson had attempted to ease the pressure on his players by taking them on a golfing weekend to St Andrews.

And it looked like the trip to Scotland had the desired affect as the visitors dominated the opening exchanges at a ground where they had won just twice in their previous 11 top-flight visits.

Blackburn had already survived a narrow escape after Hernandez spurned a fine chance from close range following a delightful Wayne Rooney pass when the Mexican hit the post five minutes later after connecting with Valencia's low cross at the near post.

Hernandez wheeled away believing he had scored but was left holding his hands on his head after realizing his shot had come back off the post and hit Paul Robinson, the Blackburn keeper reacting quickly to prevent the ball crossing the line.

It was the closest United came to scoring in a goalless first-half.

United keeper David de Gea, who was dropped after Blackburn's shock 3-2 win at Old Trafford at the end of December, saved his side with an excellent save in denying Junior Hoilett from 25-yards in the 18th minute.

But the England international let his former club off the hook on his first return to Ewood Park since joining United last summer when he headed wastefully wide following another excellent cross from the tireless Valencia.

But United sealed victory with two goals in the closing stages.

Rovers keeper Robinson will feel he should have done better for Valencia's goal, a powerful ambitious effort nine minutes from time after Rafael's pass.

Substitute Young made sure with a well-executed finish from the edge of the area to give United what could prove to be a priceless five point lead.