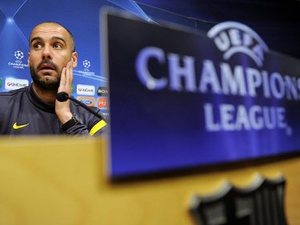 Barcelona coach Pep Guardiola believes it is crucial his forward line is on song against AC Milan as he fully expects the Serie A leaders to score at the Camp Nou in their Champions League quarterfinal second leg clash on Tuesday.

The defending champions cruised through the last round with a 7-1 thrashing of Bayer Leverkusen in the second leg at home with Lionel Messi scoring a record five goals in the process, but this tie is evenly balanced after a 0-0 draw at the San Siro last week.

Milan defended solidly and were able to break up Barcelona's quick passing through the midfield. They now know that a score draw will see them through to the semi-finals.

Guardiola realizes that the onus is on his players to break down the Italian side's solid defense.

"I'm pretty sure that they are going to get a goal and so it is down to us to try and find the way to create chances because if they have to defend with eight players in the penalty then they will do," said Guardiola.

"We are now in the latter stages of the competition and this is a key match which we have to win. We need to find a way to score goals and so we will have to with strong rhythm, press forward and move the ball quickly.

"There is no question of underestimating Milan.

"We know that they are a team that can knock us out as they create chances, defend well and are strong on the counter-attack.

"We are not a side which can hold out for very long defensively and so if Milan dominate the possession then there is something that we are doing wrong."

Defensive talisman Carles Puyol was rested in Saturday's 2-0 victory over Athletic Bilbao but is expected to return to the starting lineup against Milan.

It could again be at left-back like in the first leg with first choice Eric Abidal waiting for a liver transplant.

"Our plan is the same as normal, to go out to try and win and play our football while at the same time aware that we are up against an excellent side.

"I'm sure that they are going to be tight at the back and wait to counter-attack us.

"This is the most important match so far this season for us and while it is always important not to concede, this time it is more so than ever.

"I am ready to play wherever the coach decides and I'm just happy to help the team. Playing on the left is not my ideal position but that is the way it is and we are playing one of the top sides in Europe so you have to go out and enjoy it."

It will also be a big night for former Barca player Zlatan Ibrahimovic, who returns after a disappointing spell in Spain.

"He is one of the best strikers in the world, difficult to defend one-on-one and he can shoot from distance and so we will try and make sure he gets the ball as little as possible," said Puyol.