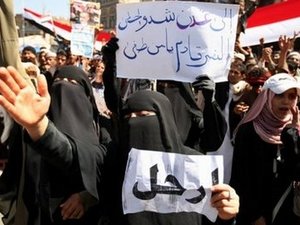 Vast numbers of protesters poured into a square in Yemen's capital Sanaa Tuesday for a massive anti-regime rally, as President Ali Abdullah Saleh blamed the U.S. and Israel for a wave of Arab revolts.

Protesters crowded three streets leading to a square near Sanaa University, where students and pro-democracy demonstrators have been camped for more than a week.

The protest got under way as Saleh called a press conference in Sanaa at which he accused Israel and the United States of fomenting anti-regime revolts rattling the Arab world.

"The events from Tunisia to Oman are a storm orchestrated from Tel Aviv and under Washington's supervision," Saleh told reporters in Sanaa.

"What is taking place on Yemen's streets is just a copy-cat attempt, as Yemen is not Tunisia or Egypt and the Yemeni people are different," he said.

Saleh was referring to revolts that have hit the Arab world, leading to the ouster of Tunisia's veteran Zine El Abdine Ben Ali and Egypt's Hosni Mubarak.

Anger at authoritarian Arab regimes in the Middle East and North Africa is now raging from Algeria to Yemen and has spread to the previously unaffected Gulf states of Kuwait and Oman, both strategic Western allies.