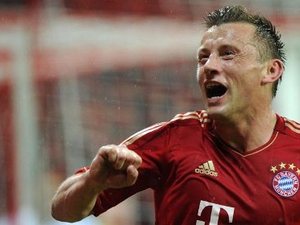 With the Bavarians having won 4-0 on aggregate, Bayern will host the first leg of their semifinal on April 17, most likely against Real Madrid, who host APOEL with a 3-0 lead in the second leg of their last-eight match on Wednesday.

Olic was back in the hero role, two years after his hat-trick in Lyon put Bayern through to the 2010 final, where they lost 2-0 to Jose Mourinho-inspired Inter Milan in Madrid.

Bayern are now within touching distance of the final that Munich's Allianz Arena will host on May 19 as they look to win the Champions League trophy for the second time and claim their fifth European Cup title overall.

"We were very concentrated, despite the amount of games we are playing at the moment," said Bayern coach Jupp Heynckes, whose side are in contention for a Champions League, Bundesliga and German Cup treble.

"In the first half, (goalkeeper) Manuel Neuer rescued us a few times. After that we came back stronger and deserved the win.

"Marseille weren't in the quarterfinals for nothing and they tried everything."

Having lost the first leg 2-0 in Marseille last Wednesday, the visitors were always facing an uphill task to win in Munich.

"We had to show honor and pride in the last 45 minutes. Of course we tried to score, but we had to stop them playing too."

First-choice goalkeeper and captain Steve Mandanda was back from suspension and endured a busy night, while midfielder Alou Diarra was suspended.

He was replaced by Benoit Cheyrou, with Brazilian striker Brandao up front and top scorer Loic Remy on the right flank.

"We lost to a great team, but we did not give up," said Remy.

"Hats off to Bayern, I hope they go all the way. We still have the League Cup final to look forward to and we want to do well in the league."

Bayern were missing suspended Germany star Bastian Schweinsteiger and Heynckes opted to leave in-form pair Mario Gomez and Arjen Robben -- the goal-scorers from the first leg -- on the bench.

Germany's Thomas Mueller started on the right, with Olic in front of Toni Kroos in the attacking midfield role.

Marseille had a good early chance when Cheyrou found his way through the Bayern defence and teed up Jeremy Morel to shoot, forcing Neuer into a low save.

The opening goal came on 13 minutes when Franck Ribery found space down the right wing and his cross was converted by Olic for his first goal for two months.

Marseille refused to lie down and Cameroon midfielder Stephane Mbia forced Neuer into another fine save on 18 minutes.

At the other end, Mandanda was kept busy as Kroos and Anatoliy Tymoshchuk both tested him, while Olic managed a shot with two defenders shadowing him.

The 32-year-old was rewarded for his hard work with a second goal on 37 minutes after some fine play by Marseille old boy Ribery allowed Austria's David Alaba to fire in a cross for Olic to convert again.

With his team 4-0 up on aggregate, Heynckes immediately brought off Mueller for Brazil's Rafinha.

The second half was mainly a dull affair with Bayern cruising into the last four and Marseille doing their best to frustrate the Germans.

Kroos also made way for Danijel Pranjic, possibly with one eye on Bayern's showdown with German league leaders Borussia Dortmund on April 11, while Gomez, who hit four against Basel in the round of 16, replaced Olic with 15 minutes left.