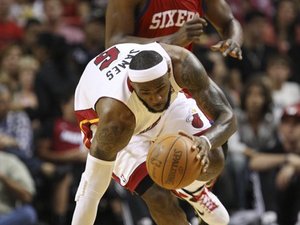 LeBron James scored a season-high 41 points for the Heat who are an NBA best 22-2 at home this season.

James also had six rebounds, four assists and three steals for the Heat, who have not lost at home since January 22 against Milwaukee.

The Heat's longest home winning streak is 18 games set between January and April of 2005.

Miami continues their five-game home stand against the Oklahoma City Thunder Wednesday before taking on Memphis, Detroit and Boston.

Mario Chalmers had 19 points, six rebounds and four assists as Miami rebounded from a one-sided 19-point loss to the Celtics in Boston on Sunday.

Miami played without all-star guard Dwyane Wade, who missed the game with an injured left knee. The Heat are 9-1 without Wade, who could return to play against the Thunder.

Evan Turner finished with 26 points and eight rebounds for the 76ers, who are 1.5 games back of Boston for first place in the Atlantic Division. Philadelphia has lost five of its last half dozen road contests.

Philadelphia's Andre Iguodala had 11 points before leaving the game in the third quarter after being poked in the eye.

Turner scored 15 points in the first half as the 76ers led 54-51 at halftime. Philadelphia led 11-6 in fast-break points and shot 53 percent from the field in the opening half.

This was the fourth meeting of the season between the two, with Miami having now swept the season series by winning them all.