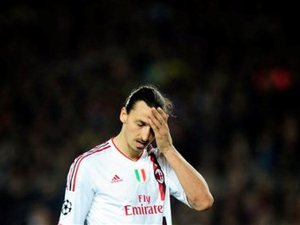 Zlatan Ibrahimovic's return to Barcelona ended with him feeling "disgusted" after two penalties led to AC Milan's 3-1 loss and exit from the Champions League on Tuesday.

Ibrahimovic was back at the Camp Nou for the first time since his 2010 exit from the Spanish champions after just one season and while the Sweden striker set up the Italian club's lone goal from Antonio Nocerino, he was kept from scoring.

"I'm just disgusted," the Sweden striker said. "They are the best team in the world but at 1-1 and, playing with intelligence, you can do something. (But) I understand better why Mourinho gets upset every time he plays here — in my opinion it was not fair."

Mourinho was handed a ban last season after going on a long-winded rant following a loss to Barcelona when he accused UEFA of aiding the Catalan club to its title in 2009, and in subsequent games.

The Italian champions' players were left aggrieved after Dutch referee Bjorn Kuipers booked Alessandro Nesta in the 40th minute for yanking down Sergio Busquets inside the area as the pair tussled during a corner kick. It was the kind of shirt pulling that often goes unpunished in top games, and started well before the corner had been taken.

Lionel Messi stepped up to score his second penalty to put the hosts back in front before Andres Iniesta's second-half goal sealed the win.

"The ball wasn't in play and he called it. It was weird, odd, it ruined the game," Ibrahimovic said. "I still don't understand what he whistled. If he calls those he should call the others. Without him the game would have been 50-50."

Barcelona eliminated Arsenal last season in the quarterfinals after Robin van Persie was given a second booking when he continued playing after the whistle early in the second half, with the game tied 1-1. In the semifinals, Madrid was left with 10 men for most of the second half of its 2-0 semifinal first-leg loss when Pepe was red carded, which led to Mourinho's criticism.

"Sometimes the referee made too many concessions," Milan coach Massimiliano Allegri said. "I don't know if it proved decisive. We made a mistake on the first penalty but he helped on the second. Playing Barca is never easy."

Barcelona coach Pep Guardiola offered few apologies after leading his team into the Champions League semifinals for a record fifth straight season. Only Real Madrid had achieved such a feat in the history of the European Cup, on its way to a record five straight triumphs between 1956-60.

"You can talk all you want about referees but that makes it five straight semifinals, the fruits of our talent and a lot of work," Guardiola said.

Apart from the penalty, Ibrahimovic — who played one season for Mourinho at Inter — did not leave with an entirely sour taste in his mouth.

"It was a good experience, we lost the game 3-1 playing against the best team in the world," said Ibrahimovic, who joined Barcelona from Inter in 2009 in a $66 million swap that included striker Samuel Eto'o. "We were there until the second penalty, and this we have to discuss."