Mourinho: Real to Roll out Big Guns against APOEL 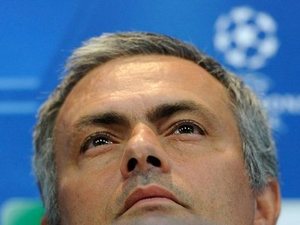 Real Madrid coach Jose Mourinho has insisted he will not make many changes to his team for the second leg of their Champions League quarter-final against APOEL Nicosia on Wednesday.

After the 3-0 victory in Nicosia last week, Real can, barring a miracle, almost certainly look forward to a semifinal place against Bayern Munich, who defeated Marseille earlier to move on.

But Mourinho said that he would be fielding a near first-choice line-up despite the huge advantage his side holds over the Cypriot minnows.

"Few people think that APOEL can win 4-0 here but we must respect our public and our rivals," the former Chelsea coach said.

"I will therefore make very few changes and we will go out there with a very strong team."

The decision might surprise even the most hardened Real fan, given the team's busy end-of-season run-in in their ambitious bid for a La Liga/Champions League double.

Mourinho justified naming a strong line-up by stressing the good physical form in which starters like Ronaldo and Xabi Alonso find themselves.

"They're good, they're not tired and want to play. We've established some good stats over the last two years in the Champions League and we want to continue in that vein."

The Portuguese coach also took aim at rumor-mongers who have suggested that he might sign for English Premier League contenders Manchester City or that Argentine striker Gonzalo Higuain could move to Malaga.

The rumors were aimed solely at "destabilizing" Real Madrid, he said.

Real's potential starting line-up for Wednesday will, however, be without injured midfielders Lassana Diarra and Sami Khedira, but Argentinian winger Angel Di Maria is included in the squad.

Di Maria played for a few minutes in the 5-1 victory over Osasuna in the league over the weekend in his slow comeback from a right thigh muscle tear which has seen him play only twice in 2012.

"He's an important player for the team and his injury was complicated," said Mourinho. "He's been training at full speed for a couple of weeks but playing is a different matter.

"At Pamplona (against Osasuna), he felt good and tomorrow (Wednesday) he will not play 90 minutes but surely more than 10."