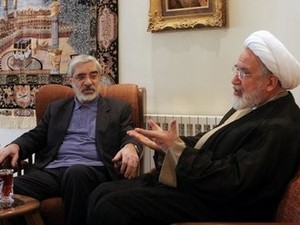 Iran denied that authorities have jailed opposition leaders Mir Hossein Mousavi and Mehdi Karroubi at a Tehran prison as repeatedly claimed by their family members.

"The published news by some hostile media regarding the transfer of Mr. Mousavi and Mr. Karroubi to Heshmatiyeh detention centre is false," Iran's prosecutor general Gholam Hossein Mohseni Ejeie told the ISNA news agency on Tuesday.

On Monday the websites of the two leaders had first reported that Mousavi, Karroubi and their wives have been "arrested and transferred to Heshmatiyeh prison."

That report was quickly denied by an unnamed judicial official on Fars news agency late Monday.

But on Tuesday the family members of the two leaders repeated their claim that the two men and their wives were being held in the jail.

"We, the children of Mousavi and (his wife Zahra) Rahnavard, utterly reject the report denying our parents' detention in the prison of Heshmatiyeh," Mousavi's Kaleme.com website quoted the opposition leader's daughters as saying, just hours prior to Mohseni Ejeie's categorical denial.

Karroubi's family too had insisted earlier Tuesday that the cleric and his wife were in prison.

"All the evidence shows Mehdi Karroubi and Fatemeh Karroubi are not present at their home," the cleric's Sahamnews.org website quoted the family as saying.

"The family of Mehdi Karroubi considers this as abduction carried out by the regime."

Late Monday Fars news agency, citing an unnamed judiciary official, had denied the claims of arresting and jailing the two men and their wives.

"They are currently in their homes and are faced only with restrictions to contact suspect elements," the judiciary official said, according to the Fars report.

Opposition supporters planned to hold fresh demonstrations for their release later on Tuesday, according to their websites, but Mohseni Ejeie warned that such illegal gatherings would not be tolerated.

"Anyone who acts against the law will be dealt with," the state television website quoted him as saying on Monday.