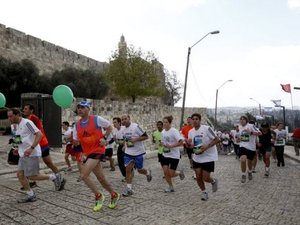 "All companies that have sponsored the marathon of Jerusalem, including Adidas, will be boycotted," said Saudi Prince Nawaf bin Faisal, chairman of the Arab youth and sports council of ministers, after a meeting in Jeddah.

Prince Nawaf told a press conference the ministers also agreed to organize a separate marathon next year to coincide with the annual Jerusalem event.

Entitled "Jerusalem is Ours", that event will take place in cities throughout the Arab world next March.

"Israel is trying to misguide public opinion into believing that Jerusalem is its capital and that is a violation of all U.N. resolutions," added Nawaf.

Around 15,000 runners participated in the March 16 International Jerusalem Marathon, which sparked controversy because part of the route passed through Arab east Jerusalem.

Israel captured east Jerusalem in the 1967 Six-Day War and later annexed it in a move never recognized by the rest of the world.

The Jewish state considers Jerusalem its eternal and indivisible capital, a claim not recognized by the international community. The Palestinians want east Jerusalem as the capital of their promised state.

they should boycot reebok too as it is owned by adidas

Shab, we care and if you dont then why even bother posting such a comment? Stop polluting evey article with your useless comments. If one day you are robbed or attacked i hope someone passes by you and says who cares, since you obviously dont care about anyone but yourself then may you face the same kind of cold reply when you need help. In every article you say "who cares" just get lost instead.

Actually it has helped in the past and it is helping in the present. You might wanna check the result of boycott before you make such a stupid statement.

Arabs who have been impotent, for one year, in stopping the Syrian butcher from slaughtering the Syrian people now seem to have regained their stamina to take another useless stance about a sports event because it passed through East Jeruslaem. !!!!

Willypagan, are you serious? The arab princes you talk about have helped in keeping israel alive!!!! Such boycotss like this one is the result of youth groups and activists and not bcuz of the zionist arab kings and princes. You obviously dont know anything about arab politics cuz if you did then you would know that they bearly blame israel for anything and are cowards when it comes to israel and their US masters. Go learn politics you ignorant waste of energy.