Formula1: Bahrain GP Could be Rescheduled 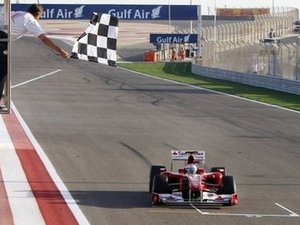 The cancelled Bahrain Grand Prix could be rescheduled to take place later this year but any decision must be taken before the Formula One season starts, Bernie Ecclestone said Tuesday.

Ecclestone told www.formula1.com in an interview that the Bahrain race -- which had been due to take place on March 13 -- could be staged later this year if organizers requested it.

Asked if there were plans to reschedule the race, Ecclestone replied: "To do that the FIA has to change the calendar, and Bahrain has to apply for a new slot. The FIA World Council will meet at the beginning of March and could look into the situation.

"I have already spoken with FIA President Jean Todt about the possibility of finding a new date and we both agreed that a decision has to be made before the season starts."

Formula One chief Ecclestone also rejected suggestions by some team officials that an additional Grand Prix could be held in Europe to make up for the loss of the Bahrain event.

"It's all very easy. We don’t need an alternative race anywhere in Europe or any other place. We need a race in Bahrain," Ecclestone said, floating the possibility of the race taking place in the mid-season summer break.

"I think the teams are sensible enough even to race in Bahrain in the summer break, and despite high temperatures, because this is the way we can support the country," Ecclestone said.

The Bahrain Grand Prix was cancelled last week following pro-democracy demonstrations in the country that led to deadly clashes with police.

The unrest in the small Gulf state is part of a wave of protests that have rippled across North Africa and the Middle East since the revolt that ousted Tunisian president Zine El Abidine Ben Ali in January.

The 2011 season is now due to get underway with the Australian Grand Prix in Melbourne on March 27.