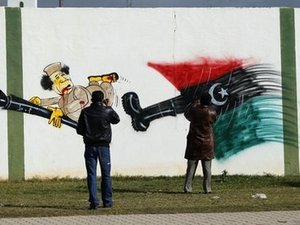 Libyan leader Moammar Gadhafi is a "living political corpse" who has no place in the civilized world and must quit power, the Interfax news agency quoted a Kremlin source as saying Tuesday.

"We believe that even if Gadhafi now manages to dig himself in, he is a living political corpse who has no place in the modern civilized world," the source said in Russia's first clear call for the Libyan leader to quit.

The source, who was not identified, also moved to explain Moscow's apparently sluggish response to the violence used by the Libyan authorities against demonstrators demanding the ousting of Gadhafi.

President Dmitry Medvedev "right from the start reacted negatively to recent actions of the Libyan authorities" but only spoke out once Russian citizens had been evacuated, the source said.

"This is the only reason. An announcement came just after we succeeded in evacuating most of our citizens from Libya," the source added.

Russia at the weekend joined other U.N. Security Council powers in backing sanctions against Libya and officials in recent days had been emphasizing that the Libyan regime's use of force against citizens was unacceptable.

But until now the Kremlin had failed to echo Western calls for Gadhafi to step down with some officials instead giving the impression Russia was more concerned about the fate of multi-billion dollar arms contracts.

Russia could lose almost $4.0 billion (2.9 billion euros) in arms export contracts to Libya after Moscow backed the U.N. sanctions, a military source was quoted as saying at the weekend.

The Kremlin source acknowledged Tuesday that Russia had interests in Libya but said that "we are not going to exchange arms for the lives of people".

The source said Russia hoped existing contracts would be honored by the future authorities in Libya.

Russia is a major supplier of arms to Libya and other Arab countries.

Defense Minister Anatoly Serdyukov said Moscow was "really alarmed" by the effect the revolts sweeping the region could have on its weapons exports.

The Kremlin, which keeps a tight control over Russian society, has a record of reacting nervously to protests in other countries, mindful of the risk of encouraging the so far small-scale protest movement in Russia.

In December it described the authorities' clubbing and imprisonment of hundreds of opposition protestors in neighboring Belarus as an "internal matter" for the country.