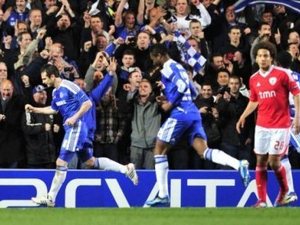 Three years after bitterly disputing their Champions League exit, Chelsea's players finally have their chance to avenge that semifinal loss to Barcelona.

The specter of "unfinished business" against the four-time European champions was raised by Chelsea midfielder Frank Lampard immediately after the London club eliminated Benfica in the quarterfinals with a 2-1 victory on Wednesday.

"They are the greatest team in the world," Lampard said. "They are going to be favorites but we have a lot of belief in ourselves. We have to perform at our best to beat them."

The Blues were far from their best, though, against Benfica at Stamford Bridge, wasteful in front of goal and nervy in defense despite a man advantage.

Lampard had put Chelsea 2-0 up on aggregate with the second-leg opener from the penalty spot in the 21st minute and Benfica had Maxi Pereira sent off in the 40th.

But a succession of clear-cut chances were squandered by Chelsea after the break as the visitors gained in confidence. It was a nervy conclusion after Javi Garcia headed Benfica level on the night in the 85th minute.

Another goal would have sent Benfica through on away goals but Raul Meireles blasted the ball into the net on a counterattack during tense stoppage time to secure Chelsea's 3-1 aggregate win and deny the visitors a first European Cup semifinal appearance in 22 years.

"It was a tough game," Lampard said. "Winning 1-0 away leaves you in a bit of a conundrum how to approach the game. We gave them an idea they could come and win the game. We didn't want to go too gung ho but we created enough chances tonight in the second half. We are pleased to be in the semis."

Chelsea's last semifinal ended in acrimony in 2009 and bans for Didier Drogba and Jose Bosingwa over their conduct toward referee Tom Henning Ovrebo.

The Norwegian denied several Chelsea penalty appeals in the 1-1 draw with Barcelona, which advanced on away goals and won the competition.

"It will be exciting to play two games against probably one of the best teams in the world," Chelsea interim manager Roberto Di Matteo said. "They obviously have some individual players that are a big threat and very dangerous."

Chelsea is yet to win European football's most prestigious prize — but doing so might be the only route back into the Champions League next season. The side is fifth in the Premier League, outside the top four Champions League qualification places.

But a new air of confidence has engulfed Stamford Bridge in the last month since Andre Villas-Boas was dismissed and Di Matteo was put in temporary charge until the end of the season.

This, though, was not a commanding performance from the 2008 finalists, with Di Matteo admitting that "the team wasn't sparkling."

"We have been the better team in both legs and I am very proud of my men," Benfica coach Jorge Jesus said through a translator. "We have played with 10 men for the best part of an hour and we were still the better team and made Chelsea look ordinary. We were penalized by the referee unjustly I feel."

And Pereira — the only regular defender in a makeshift back four — was sent off following a lunge on John Obi Mikel, his second bookable offense.

But Benfica did not look like a side playing with 10 men. At the start of the second half, Chelsea goalkeeper Petr Cech had to block a left-footed curling attempt from Cardozo, while Pablo Aimar found the space to strike into the side netting.

Salomon Kalou should have doubled Chelsea's lead, but his shot lacked the power to find its way into the net and Ramires failed to push the ball into the open net.

Fernando Torres also saw a shot deflected away from the goal by Emerson, while Juan Mata flashed the ball across the face of goal from a tight angle.

"We probably made it a little bit more difficult for ourselves by not scoring a second goal," Di Matteo said. "That kept them alive and gave them hope that they would score a goal and still be in it."

That goal came when Garcia headed past Cech with five minutes to go.

Had Nelson Oliveira found the target soon after, Benfica would have been heading into the last four but Chelsea clung on with Meireles' strike easing the late nerves.