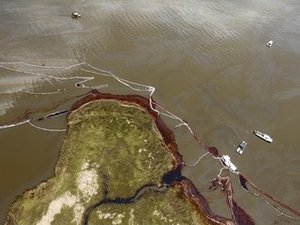 BP's damaged public image was left in tatters Friday after furious U.S. lawmakers pilloried the energy giant's boss, accusing him of stonewalling on the causes of the Gulf of Mexico oil spill.

In hostile questioning on Thursday, lawmakers tried and failed to win answers about the spill from BP's chief executive Tony Hayward.

"I can't pass judgment on those decisions," he told openly disbelieving members of a key House panel investigating the worst environmental disaster in U.S. history. "I think it's too early to reach conclusions."

Just a day after BP won praise for bowing to White House demands to create a 20-billion-dollar fund to pay spill-related compensation claims, the British company's CEO was back in the hot seat.

Hayward said he would wait until BP finished its probe into the April 20 blast that killed 11 workers aboard the Deepwater Horizon drilling platform, sank the rig, and sent oil gushing into the Gulf of Mexico's waters.

"I wasn't involved in any decision-making" on how to drill, test, or secure the well, added Hayward, a 28-year oil industry veteran.

Hayward's contrite opening remarks to the panel, and a vow that the British energy giant would repair the economic and environmental damage wrought on U.S. southern shores, were quickly overshadowed as he declined to reveal specifics.

Waving pictures of oiled birds, the representatives did not hide their frustration or derision in a piece of political theater before a barrage of media cameras.

Hayward, who has been dubbed the most hated man in America, offered an olive branch at the start of the day-long hearing, apologizing for the catastrophe.

"I know that only actions and results, not mere words ultimately can give you the confidence you seek. I give my pledge as the leader of BP that we will not rest until we make this right," he said.

"We and the entire industry will learn from this terrible event and emerge stronger, smarter and safer."

But in a sign of how high tensions are running, a protestor with a blackened face and hands briefly disrupted the hearing. "You need to be charged with a crime, Tony," she shouted. "You need to go to jail!"

Despite a massive mobilization, millions of gallons of crude are fouling the shorelines of four U.S. states, closing down vital fishing waters and hitting the region's lucrative tourist industry.

Hayward told lawmakers BP is now siphoning up an average of 20,000 barrels a day of oil to two processing ships on the surface.

And the U.S. disaster coordinator, Admiral Thad Allen, said that by early next week the company hoped to be containing 28,000 gallons -- some of which will be burnt off by one of the surface ships.

In some good news, Allen said drilling on a relief well, seen as the only way of permanently capping the spill, was ahead of schedule.

"Mid-August was the target date. They're actually ahead of schedule right now, but I'm not going to guarantee it will be earlier," Allen said.

On Wednesday, BP agreed to set up a 20-billion-dollar escrow fund to pay compensation claims from thousands of Gulf businesses and residents.

The deal was struck after Hayward and BP chairman Carl-Henric Svanberg were summoned to the White House for talks with President Barack Obama, who has come under fire for weak leadership over the crisis.

A CNN poll showed the number of Americans who believe Obama is tough enough to handle a crisis has dropped 11 percent to 53 percent from the same period last year.

News of the escrow fund deal with the U.S. administration sent BP's share price soaring almost 10 percent on Thursday, after days of falls sparked by uncertainty over its future.

Russian President Dmitry Medvedev expressed his own concern about the firm's future in an interview with the Wall Street Journal.

"What I know is that BP will have to pay a lot of money this year," he said. "Whether the company can digest those expenditures, whether they will lead to the annihilation of the company or its breakup into pieces is a matter of expediency.

Meanwhile, Senate Democrats said they had come to an agreement on the framework of an energy bill to reduce U.S. dependence on fossil fuels, after Obama appealed to Americans Tuesday in his first Oval Office address to launch a "national mission" for clean energy.(AFP)