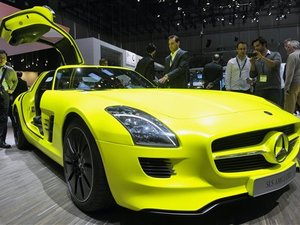 Mass-market automakers like Toyota, Fiat and Ford say green technologies on display at the Geneva Auto Show will help them weather the impact of skyrocketing fuel prices — while less humble sports car makers like Lamborghini flaunted their gas guzzlers.

Companies rolled out a raft of new models — including many electric, hybrid and more efficient conventional engines — in a sign of renewed confidence following the economic crisis that bottomed out auto sales and put a freeze on new models.

"I remember the auto show of two years ago. Pretty grim," said Stephen Odell, the chief of Ford Europe, on Tuesday. "I think we are in a better place."

But General Motors CEO Dan Akerson thought it was too early for optimism as oil prices continue to rise due to unrest in energy-producing nations in the Middle East.

"I don't think the industry learned a lot of lessons from 2008. They will this time around," he said on the sidelines of the motor show.

Opel chief Nick Reilly said fuel costs would make the situation "clearly more difficult" if they remained elevated, while Daimler's Dieter Zetsche estimated that an oil price of $150 a barrel "would be very heavy."

The recent surge in oil to around $100 has pushed up gasoline prices in the U.S. by nearly 20 cents per gallon in the past week. That's the sharpest increase since 2005, according to the Oil Price Information Service. Americans are now paying roughly $75.6 million more per day to fill up than a week ago.

Auto industry consultancy IHS is still forecasting around a 6.3 percent increase in total global passenger car volumes for 2011, "with the proviso that the knock-on effect of what is currently occurring in Libya and elsewhere could have profound consequences for the global economy," IHS automotive analyst Tim Urquhart said.

But premium brands like Lamborghini and Ferrari were not going to let anyone kill their buzz.

At the show Lamborghini rolled out the sixth generation of its V6 engines, which get just 13 miles (21 kilometers) to the gallon, and Ferrari unveiled the FF, a four-seat, four-wheel drive V12 billed as the company's most powerful four-seater ever.

Besides a few such flamboyant examples, the key theme at the auto show, as during the financial crisis years, was fuel efficiency.

Opel launched the electric-hybrid Ampera, which will go on sale in the autumn. Opel chief Reilly said he "was pretty optimistic" about the future of electric, noting his company already had 3,000 Internet orders, and 800 customers had already made a down payment without even making a test drive.

Rolls Royce's one-off electric-powered Phantom luxury sedan could give electric the kind of upscale appeal it so far lacks. The concept car was unveiled Tuesday, with its traditional Spirit of Ecstasy steel hood ornament — of a woman leaning forward with arms stretched backwards — replaced with a glowing blue version of the same statuette. There are no plans to produce the car, but it will be used as a test vehicle to come up with ideas for possible future production models.

Volkswagen presented a luxury hybrid for its Porsche brand, the Panamera S. The car boasts carbon emissions of 159 grams per kilogram and consumption of 6.8 liters per 100 kilometers.

Ford Motor Co. said it is boosting its offering of low-emissions technologies and will have five alternative power trains to market in Europe by 2013.

Ford Europe chief Odell told reporters that the new power trains will include hybrid, pure electric and plug-in hybrid technologies — including the first all-electric vehicle, the Transit Connect, making its European debut in Geneva. It goes on sale later this year.

Odell said he wasn't overly concerned by fluctuating fuel prices: "With our capabilities in regular combustion engines and with five electric vehicles in production we are well placed."

Sergio Marchionne, CEO of Italy's Fiat and U.S. automaker Chrysler, took a similar position, saying Fiat's low-consumption vehicles will protect it from the impact of higher oil prices. Fiat is focusing on squeezing more power out of engines, notably with the Twin Air engine on its popular 500.

The Twin Air engine has 85 hp and an emission level of 92 g CO2/km, according to Fiat.

"On the U.S. side, I think our experience before in spikes in oil prices is that the market readjusts in a period of 60 to 90 days, so I don't think it is going to have a drastic impact on consumption," he said.

"Having said this, I think it is absolutely essential that the whole American car industry focuses on reducing consumption on vehicles," Marchionne said.

Fiat boasts it has the lowest C02 output in Europe, 123.1 grams per km, according to Jato Dynamics.

So far, Fiat has not aggressively entered the race in hybrid vehicles, a market dominated by Toyota. But Marchionne said Chrysler would have a hybrid at Detroit in 2012 — and suggested that Fiat may have one at Geneva next year.

How long and how quickly drivers convert to hybrid and electric cars depends not only on steep gas prices but also on government incentives.

"I think governments have a role to play in conjunction with us to bring down costs," Ford's Odell said.

Toyota Europe — which has 14 years experience making hybrids — says it aims to have 20 percent of its sales be hybrids by 2013, up from 9 percent now.

Even Toyota said that for pure engineering reasons — liquid fuel allows cars to drive a longer distance at the same volume — combustion engines will be around for a time to come.

"It's the emerging markets that will drive growth going forward. When you look at the emerging world, it is difficult to see them adopting electric vehicles," said Takeshi Uchiyamada, Toyota Motor Co. executive vice president.

Gas-powered vehicles, he said, get more power for the same volume than alternative technologies.

"As long as the fuel that is used for burning in internal combustion is secure, I don't think it will disappear," he said.

Overall, automakers' optimism at Geneva was evident in the 170 rollouts planned during two press days Tuesday and Wednesday. After seeing participants scale back in recent years, organizers said they had requests for more show space than they could provide, and that 70 brands will be represented from 31 countries.

Geneva's motor show, which focuses primarily on European companies, is considered one of the more prestigious auto events of the year. The 81st edition of the show opens to the public from March 3-13.