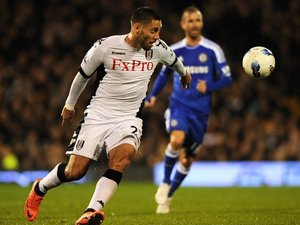 Clint Dempsey's late equalizer saw Chelsea lose ground in the race for a Champions League spot after they were held to a 1-1 draw by Fulham in the west London derby at Craven Cottage on Monday.

Frank Lampard's penalty -- his 150th goal in the Premier League -- had Chelsea in control, but United States international Dempsey headed home his 16th goal of the season eight minutes from time.

The result was the least Fulham deserved and will be seen as a huge missed opportunity for Chelsea.

Only the top three clubs in the Premier League are guaranteed a place in next season's Champions League proper, with the fourth-placed side gaining entry to a qualifying round.

Chelsea, the lone English club left in this season's Champions League, could muddy the waters by being crowned champions of Europe although they face title-holders Barcelona in the semi-finals.

This draw left them two points behind fourth-placed Tottenham, beaten by Norwich earlier on Monday, and Newcastle who on Monday beat Bolton to go fifth.

It was far from the ideal score line for Chelsea ahead of their FA Cup semi-final against Tottenham on Sunday and Champions League date with Barcelona a week on Wednesday.

Chelsea were bidding to get back the top four for the first time since February 11 this year, three weeks before manager Andre Villas-Boas was sacked.

Since then interim coach Roberto di Matteo has revived Chelsea's fortunes, having only lost one of his 11 matches in charge thus far.

The Italian made good on his word to make changes from Saturday's win over Wigan and he was further boosted by the return of Captain John Terry from a rib injury.

Fernando Torres started instead of Didier Drogba, while Juan Mata, who scored the winner against Wigan, was dropped to the bench in favor of Salomon Kalou.

Fulham, meanwhile, have little to play for other than Martin Jol's wish to finish in the top half of the table.

Aside from Fulham captain Danny Murphy's return from illness, Jol's only change to the team that won 3-0 at Bolton on Saturday was enforced, with Kerim Frei taking the place of Bryan Ruiz, who broke his metatarsal at the Reebok.

After a cagey opening, Torres fired a powerful shot on target only for his 10th minute effort to be deflected over the bar by Brede Hangeland.

But Fulham enjoyed the better of the first half, with Frei and John Arne Riise posing problems for Branislav Ivanovic.

Riise was unlucky not to see his excellent cross turned into the net by Dempsey in the 20th minute, after the forward lost his footing.

Then three minutes later a neat link-up between Dempsey and Mousa Dembele ended with the striker forcing Chelsea goalkeeper Petr Cech into a diving save.

Frei tested Cech a minute later and the visiting keeper did well to turn the winger's shot wide of the post.

But all Fulham's first-half endeavor was rendered pointless a minute before the break when Danny Murphy slid in two-footed on Salomon Kalou, leaving referee Mark Clattenburg no option but to award the visitors a penalty.

Chelsea came out after the break with more purpose and Meireles should have done better than shoot over the bar.

But Fulham refused to give up and, after Cech had kept out Aaron Hughes with a point-blank save, Dempsey headed Fulham level from the resulting corner.