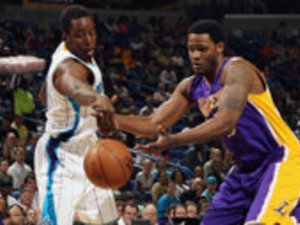 Kobe Bryant missed his second straight game, but the Los Angeles Lakers shrugged off the absence of their superstar to edge New Orleans 93-91 on Monday in a National Basketball Association contest.

Spain's Pau Gasol scored 25 points with nine rebounds for the Lakers. Ramon Sessions, acquired in a mid-season trade last month, added 17 points for Los Angeles, including a three-pointer that put the Lakers up 92-86 with 26 seconds to play.

Metta World Peace -- the player formerly known as Ron Artest -- finished with eight points, including a three-pointer with a minute and a half remaining that broke an 86-86 tie.

Los Angeles, with Bryant sidelined again by a sore left shin, had trailed by as many as eight points in the fourth quarter.

Andrew Bynum added 18 points with 11 rebounds for Los Angeles, who had lost their previous two games.

Bryant also missed the Lakers' 125-105 defeat Saturday to Phoenix with the inflammation of his shin.

He was originally injured on March 31 when he was kicked in the shin in a game against the Hornets.

"It's very painful," Lakers head athletic trainer Gary Vitti said. "Kobe's been playing with this and it's not getting any better. The only way to stop it is to shut him down."