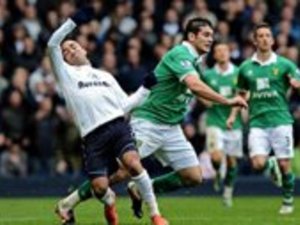 Tottenham's bid to qualify for the Champions League suffered another setback as Norwich clinched a shock 2-1 win at White Hart Lane on Monday.

Harry Redknapp's side were well below their best as Norwich took an early lead through Anthony Pilkington and, although Jermain Defoe equalized before the break, it was the Canaries who deservedly took the points thanks to Elliott Bennett's second half winner.

Spurs have now won only one of their last eight Premier League matches after a lackluster performance which raised doubts about their ability to hold off Newcastle and Chelsea in the race to finish in the top four. Fourth placed Tottenham are ahead of Newcastle only on goal difference.

While Redknapp continues to deny that the speculation linking him with the vacant England job has proved a distraction, there is no denying that Tottenham's results have taken a major nosedive since Fabio Capello quit as England coach.

Paul Lambert's team, only the third team to win at White Hart Lane this season, were in charge from the start and Grant Holt beat Ledley King to a Pilkington cross, only to prod wide.

The Canaries were ahead in the 12th minute after some shambolic defending by Tottenham.

Younes Kaboul blocked Aaron Wilbraham's shot and Kyle Walker went to clear, but his attempt ricocheted off King into the path of Pilkington, who calmly fired past Brad Friedel.

Norwich thought they should have been given a penalty when King tangled with Holt in the Norwich box, but referee Michael Oliver waved play on much to the fury of Lambert on the touchline.

To add insult to injury for Lambert, Spurs then raced up the other end and equalized in the 33rd minute.

Defoe latched on to a sublime pass from Jake Livermore and produced a fine, chipped finish over Norwich goalkeeper John Ruddy.

Spurs were forced into a substitution when French defender Younes Kaboul hobbled off and was replaced by Ryan Nelsen just before half-time, while Redknapp also sent on Emmanuel Adebayor for Louis Saha at the interval.

Adebayor nearly made an immediate impact as he burst into the Norwich penalty area and drove in a powerful shot that forced Ruddy to tip over.

Lambert was angry with Oliver again on the hour when Adebayor pushed Aaron Wilbraham in the Tottenham area but no penalty was given.

Gareth Bale went close to putting Spurs ahead with a long-range effort that cannoned off the woodwork.

But Norwich regained the lead through Bennett's first Premier League goal as the former Brighton midfielder thumped a 20-yard strike beyond Friedel.

Bale flicked a Benoit Assou-Ekotto cross just wide as Tottenham went in search of an equaliser.

It was Norwich who finished stronger and Simeon Jackson missed a sitter after good work from Steve Morison.