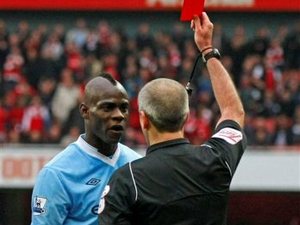 Manchester City forward Mario Balotelli issued a public apology Monday for his latest act of indiscipline and made an appeal to stay in Italy's national team for the European Championship.

He picked up his fourth red card in two seasons with City in the 1-0 loss at Arsenal on Sunday, prompting questions about whether Balotelli has again broken the new code of ethics installed by Italy coach Cesare Prandelli.

"I'm very sorry for what happened and for the disappointment caused to Manchester City, and especially to (manager) Roberto Mancini, who I admire and wish well," Balotelli said in a statement provided to the ANSA news agency by his agent, Mino Raiola. "I am very attached to the national team, but yesterday I committed two fouls in the course of action, not by reaction."

Balotelli was given the red card in the 90th minute after he was booked for lunging at Bacary Sagna's knee, three minutes after Mikel Arteta had scored for Arsenal.

"I didn't break the code of ethics," Balotelli said. "I already missed out on the national team for foolishness and I wouldn't do it a second time. I hope to be there at the training camp in April. Let's wait for the final verdict of the ban."

Balotelli also could face a suspension of up to nine matches from the English Football Association for his mounting number of offenses this season.

Sunday's red card earns him a one-match suspension and an extra two games are added because it was his effectively third red card of the season.

While he had only been sent off once this season before Sunday's incident, Balotelli received a four-match suspension in January after his stamp on Tottenham's Scott Parker that was missed by the referee during the game.

If he was also retrospectively punished for violent conduct for a knee-high tackle on Alex Song earlier Sunday at Arsenal, Balotelli could be banned for a further three matches. That would then count as a fourth sending off this season which could incur another three-match ban.

It also throws into doubt Balotelli's immediate future with the Italy team after the stamp on Parker caused Prandelli to leave him out of the squad for the friendly against the United States in February.

"I'll evaluate from the videos of the sending off whether or not to apply the code of ethics for Balotelli," Prandelli said Monday, two weeks before a two-day training camp scheduled for the Azzurri.

Besides Balotelli, midfielder Daniele De Rossi and Argentine-born forward Pablo Osvaldo have also missed matches with Italy for disciplinary reasons since Prandelli introduced his code upon taking the Italy job in 2010.

After the Arsenal match, City manager Mancini said he "was finished" with Balotelli.

"I'm very sorry for him because he is losing his talent and his quality," Mancini said. "He is in a bad way for his future, and he needs to change his behavior."

Earlier this season, Balotelli had to come up with an explanation for English authorities after a fire broke out in his house when fireworks were let off in his bathroom.

In March 2011, it emerged that Balotelli threw a dart at a City youth-team player. No one was hurt in the incident and he escaped punishment.

In his statement, Balotelli addressed his future at City.

"At the end of the season I will speak with the club and we'll see," he said.