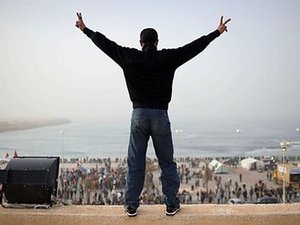 Moammar Gadhafi and key aides will be probed over allegations they committed crimes against humanity while fending off the uprising in Libya, the International Criminal Court's prosecutor said Thursday.

"We have identified some individuals with de facto or formal authority, who have authority over the security forces," that have clamped down on a rebellion that started on February 15, Luis Moreno-Ocampo told journalists in The Hague.

"They are Moammar Gadhafi, his inner circle, including some of his sons."

Ocampo also listed individuals including the veteran Libyan leader's head of personal security, and the head of the external security forces.

Reports say that Gadhafi has recruited some 800 Tuareg separatist fighters from Niger, Mali, Algeria and Burkina Faso to quash a popular uprising against his regime.

"Eight hundred Tuareg originating from Mali, Algeria and Burkina Faso have been recruited by Libya to fight on Gadhafi's side," a Malian security source told Agence France Presse.

"We have the same information," said a Niger security source, adding that among the 800, only a "small handful are from Algeria and Burkina Faso."

More than 100,000 people have already fled Libya to escape a vicious crackdown by Gadhafi loyalists which has left at least 1,000 dead, according to U.N. estimates.

The evacuation of thousands of people stranded at the Tunisian-Libyan border started Thursday with the transport of hundreds of Egyptians by bus to an airport and port.

Long queues were lined up along the road beside a camp at Choucha, where the Tunisian army had taken in some 15,000 people, seven kilometers from Ras Jedir.

Border officials have said that about 86,500 people crossed over since February 20, including around 38,000 Egyptians, a few days after protests started against Gadhafi.

Meanwhile, the Dutch defense ministry said that three Dutch soldiers were imprisoned at the weekend by armed men during an operation to evacuate civilians from Libya.

"We confirm it," a navy official told AFP when asked about the capture of three marines Sunday reported by Dutch daily De Telegraaf.

The paper said the three marines were captured while helping with the evacuation from Sirte in northern Libya of two unnamed civilians, one Dutch and another European, in a helicopter.

The failure of the rescue operation and the capture of the Dutch marines were not made public earlier for security reasons, De Telegraaf said.(Naharnet)