Milan Edge Chievo to Go back to the Top 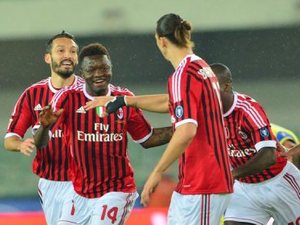 AC Milan went back to the top of Serie A, for 24 hours at least, with a hard fought 1-0 victory at Chievo in rainy Verona on Tuesday.

Milan bounced straight back from Saturday's 2-1 defeat at home to Fiorentina despite being ravaged by injury and suspensions -- they had 14 players missing.

Ghana midfielder Sulley Muntari scored the only goal of the game early on as Milan moved two points clear of Juventus.

The Old Lady of Turin can retake the lead if they beat Lazio on Wednesday.

But after the victory Milan coach Massimiliano Allegri vented his anger at the media for their criticisms of his team over the last 10 days.

"Many people were delighted we fell to Fiorentina but we've got back up," he told Sky Sport.

"We knew that tonight if we lost or failed to win we could be out of the title race.

"Even when we were four points clear there was a media campaign waiting for us to lose but you still need to wait for our funeral.

"What disappoints me is that we're fighting with Juve and it seems as if they're doing amazing things and we're messing up.

"The numbers say something else: that we're not less than Juve."

It was a far from vintage Milan performance as Chievo bossed the game but showing the true form of champions they managed to nick the three points despite not playing well.

Such were their problems that Allegri gave teenage full-back Mattia De Sciglio a first ever league start, although he previously played in the Champions League.

And veteran midfielder Gennaroi Gattuso was draughted back in for a first start since September.

Under pressure after picking up a single point from their previous two games and being overhauled by Juve, Milan needed a bit of luck and things immediately started to look rosy.

Muntari set his sights from more than 25 yards out and although he hit his strike truly, goalkeeper Stefano Sorrentino seemed slow in diving to his right and the ball nestled into the bottom corner on eight minutes.

That apart it was almost all Chievo in the first half but Milan still led at the break.

Former Milan forward Alberto Paloschi had the ball in the net after he was slipped in by Nicolas Frey but that effort was ruled out for a dubious-looking offside.

The young forward then played in Frenchman Cyril Thereau but goalkeeper Christian Abbiati tipped his low effort around the post.

Milan were playing exclusively on the break and one long punt forward caught the hosts' defense napping, sending Antonio Nocerino scampering clear only for the midfielder's awful first touch to carry straight through to Sorrentino.

Frey crossed to the back post but Sergio Pellissier headed wide.

Up the other end, Brazilian Robinho's step over sent two defenders the wrong way but his near post shot was shoveled behind.

On the stroke of half-time Pellissier teed up Luca Rigoni but he failed to hit the target from 15 yards.

Chievo continued to dominate against a weakened Milan team in the second half and Pellissier had two glorious chances to score but the first he volleyed straight at Abbiati and the second was deflected over.

Milan had their hearts in their mouths when Thereau's back flick clearly hit Alessandro Nesta's hand in the box but the Frenchman was flagged for offside.

Francesco Acerbi had the ball in the Milan net with the last kick of the game but that too was chalked off for offside, this time a clear one.