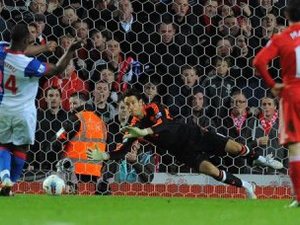 Brad Jones dedicated Liverpool's 3-2 win at Blackburn to his son Luca, who died of leukemia five months ago, after the Australian keeper endured a bitter-sweet Premier League debut for Kenny Dalglish's side on Tuesday.

Jones, third in the pecking order of keepers at Anfield, had only made two senior cup appearances for the club before he was unexpectedly called into action in Liverpool's last game before Saturday's FA Cup semifinal with Everton at Wembley.

Brazilian stopper Alexander Doni was shown a straight red card for bringing down Junior Hoilett and will now miss Liverpool's big game at the weekend.

It leaves 30-year-old Jones in line to face Everton as first-choice Pepe Reina is still serving a ban for getting sent off in a 2-0 defeat at Newcastle on April 1.

Jones pointed to the heavens after saving a penalty from former Middlesbrough teammate Yakubu just seconds after he went on as a substitute on a night of high drama at Blackburn.

The keeper, whose partner Dani gave birth to a baby boy Nico Luca Jones last week, said: "It has been a difficult 18 months with my son passing away.

"That was for him and for the Liverpool fans, who have been brilliant."

Yakubu went on to score twice, his second from the spot after Jones had needlessly fouled the Nigerian striker, after Maxi Rodriguez gave Liverpool a 2-0 lead.

Jones added: "I remembered many a Friday morning on the training pitch at Boro.

"We used to practice penalties, so I knew his (Yakubu's) style and what he does."

"We've not got a problem with anybody who plays," said Dalglish, whose side head for Wembley on the back of a first win in five games.

"It's been a smashing day for us. We've not had the best of times and we had a man sent off, but we have come away with a 3-2 win.

"The players deserved credit for the resilience and character they showed. I just want to praise their attitude and commitment."

Liverpool clinched victory with a stoppage time goal from Andy Carroll, who said: "We all believed we could get the winning goal at the end.

"We kept attacking all the way through the game.

"We haven't been on the best of runs, but we got early goals and passed it around.

"We have been a bit unlucky in the past few games, but the luck will come on our side sooner rather than later.

"This is a great lift for all the lads before we go to Wembley on Saturday."

Blackburn remain in deep trouble near the bottom of the table, and boss Steve Kean was furious that a free-kick was not awarded in the build-up to the winner.

Kean said: "Until then, we had a point that took us up two places in the league. Now we've got to pick ourselves up.

"We can't feel sorry for ourselves.

"If we had managed to hang on there, I'd probably have been disappointed with a point but a point would have taken us up two places."