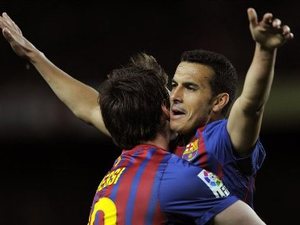 Defending champions Barcelona upped the pressure on leaders Real Madrid on Tuesday as they moved to within a point of their bitter rivals after a 4-0 thumping of Getafe.

Two goals from Alexis Sanchez, one from Pedro Rodriguez and Lionel Messi's 39th in the league this season gave Barca a 10th consecutive league victory after another near perfect performance by the Catalans.

In the 22nd minute the home crowd chanted the name of Eric Abidal, the French international who on Tuesday underwent a liver transplant, in recognition of the number 22 shirt he wears as part of Barca's squad.

Real can restore their four point advantage if they beat Atletico Madrid on Wednesday - they have not lost to their city rivals since 1999.

The clash between Barca and Madrid on April 21st in the Camp Nou has become increasingly important as the Catalans have reduced the gap on Madrid from 10 points to only one in less than a month.

Barcelona dominated Getafe throughout, controlling possession with their usual passing game and goalkeeper Victor Valdes summed up the situation on the final whistle.

"Our work is done here, let’s wait and see what Madrid do tomorrow night in their game," he said.

However coach Pep Guardiola was cautious about talking about his team's title chances.

"All we can do is think about our games, we have a big game away to Levante at the weekend and then a Champions League semifinal, we have to focus on those games and nobody else’s," he said.

For Osasuna the result was the perfect recovery from last weekend's 6-0 reversal at Rayo Vallecano, however they were helped by a card happy referee who booked players from start to finish.

Espanyol ended the game with nine men when Philippe Courtois and Juan Forlin were sent off in the second half for two bookable offences each.

Osasuna stay sixth on 46 points while Espanyol, who have not won in five matches, remain four points behind in ninth position.

Real Betis and Real Sociedad shared a 1-1 draw to help both teams edge closer to survival.

Carlos Vela put Sociedad ahead just after half-time before Ruben Castro equalised on 69 minutes for Betis.

Earlier Imanol Agirretxe had a first-half penalty saved by Fabricio Agosto in the Betis goal.