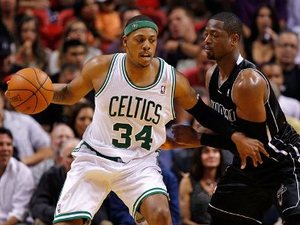 Paul Pierce scored 27 points and Kevin Garnett added 24 as the Boston Celtics beat LeBron James and the Miami Heat 115-107, their second victory over the Heat in less than a fortnight.

Garnett added nine rebounds and Rajon Rondo scored 18 points with 15 assists -- his 18th straight game with double-digit assists -- as the Celtics backed up their 91-72 victory over the Heat on April 1.

While that victory depended on defense, it was offence that made the difference on Tuesday.

Brandon Bass added 12 points and 10 rebounds and Avery Bradley chipped in 11 points for the red-hot Celtics, whose 61 percent shooting was a season-high.

James finished with 36 points, seven rebounds and seven assists for the Heat. Dwyane Wade and Mario Chalmers had 18 apiece and Chris Bosh had 13.

Miami trailed much of the night, and when Bosh had a chance to tie the game at 89-89 when he was fouled on a scoring play he missed the free-throw.

The Celtics scored five of the next six points in the contest to take a 94-89 lead and quickly pushed their advantage back to double digits.

"That's a tough loss and none of us were expecting that," Heat coach Erik Spoelstra said. "To give up 115 points on our court, that's not our style."

With Kevin Garnett continuing his late-career revival in his new role as a center by making four consecutive fourth-quarter jumpers, the Celtics held on after the Heat closed within 89-88.

"They shot the ball very well," Wade added. "When they shoot like that, it's going to be tough to beat them."