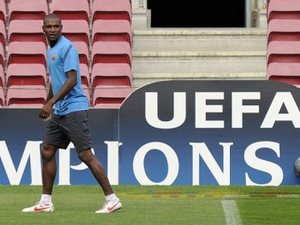 Barcelona defender Eric Abidal underwent his scheduled liver transplant on Tuesday, as more than 70,000 Camp Nou fans paid tribute to the France defender during a 4-0 win over Getafe in the Spanish league.

Sporting director Andoni Zubizarreta told Canal Plus TV that Abidal was in hospital, undergoing surgery during the game.

The 76,041 spectators at the Camp Nou paid tribute to Abidal after 22 minutes, the same number as his jersey.

"We still don't have any news, we're hoping the doctors tell us something," Zubizarreta said. "(But) we know he's in good hands."

The 32-year-old Abidal underwent liver surgery in March 2011 but returned for the final part of last season. He played this season until last month, before the club said a transplant was necessary.

"We wanted to dedicate (the win) to Abidal and his cousin, Gerard (who donated the liver)," coach Pep Guardiola said.

Abidal's future playing career is in doubt due to the surgery.