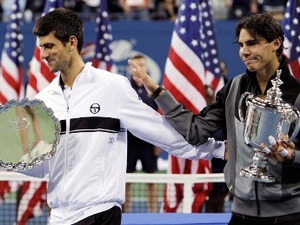 Novak Djokovic and Rafael Nadal will play an exhibition match at Real Madrid's football stadium, hoping for a crowd of 80,000 to watch tennis' top two players.

Madrid says on its website that the top-ranked Djokovic and local favorite Nadal will meet on July 14 at the Santiago Bernabeu, with proceeds going to the club's and Nadal's charity foundations.

Tuesday's statement did not say what surface the match will be played on.

Nadal and Djokovic have won a combined 10 majors and have had one of sports' top rivalries of late. Djokovic had defeated Nadal in the last seven finals they've played, including in the last three Grand Slam tournaments -- Wimbledon, U.S. Open and Australian Open.