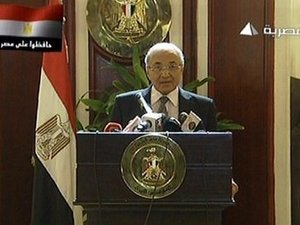 He will be replaced by Essam Sharaf, a former minister who took part in the mass demonstrations in Cairo's Tahrir Square which led to strongman Mubarak's resignation on February 11 after three decades in power.

"The Supreme Council of Military Forces announces that it has accepted the resignation of Prime Minister Ahmed Shafiq," the statement said, without elaborating on the reasons for the move.

The council has been running Egypt since Mubarak stood down.

Since the fall of Mubarak, protesters have continued to call for a replacement of the current government, which includes several ministers from the toppled regime.

The council has previously ordered the government to run the country's affairs for six months "or until the end of parliamentary and presidential elections" and is also examining constitutional reforms.

Shafiq had been expected to stay in office at least until the elections.