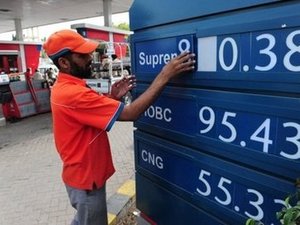 "Persistent uncertainty in the region continues to support fears of contagion," said Barclays Capital in a report.

"Lost output from countries like Libya and the increasing likelihood of a pushback in foreign investment is set to support longer-term prices even further," it added.

As trouble hit Oman, Bahrain and Yemen, the situation in Libya grew more tense as embattled leader Moammer Gadhafi warned of a "very bloody war" in which "thousands of Libyans would die" if the West supports the uprising.

Loyalist military and air attacks on the strategic oil port of Brega, home to major petroleum operations, added to concern, while the International Energy Agency said more than half of Libya's crude production was not making it to the international market.

The IEA revised upward its estimate of Libya's shut-in oil capacity to between 850,000 and one million barrels per day, out of a total of 1.6 million barrels -- mostly sent to European buyers.