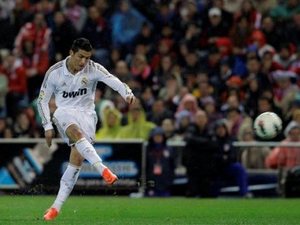 A Cristiano Ronaldo hat-trick fired Real Madrid to a 4-1 derby win at Atletico Madrid on Wednesday to restore their four-point cushion over Barcelona at the top of the Primera Liga.

Ronaldo opened after 25 minutes with Falcao getting the equalizer for Atletico after 55 minutes before the Portuguese star wrapped up his hat-trick to make it 40 league goals for the season, one more than Lionel Messi.

Jose Callejon got the other goal for the leaders.

Barcelona had moved to within a point of Real on Tuesday after a 4-0 win over Getafe, with six games now left including a meeting between the top two on April 21.

"After Barca's win yesterday there was a bit of pressure, but we're happy with that and we have to look to win the rest of our games," said Ronaldo.

"Ronaldo obviously had a spectacular game, but all the team have shown great character and played well, especially when Atletico levelled the game and had the crowd behind them," he said.

The game started off at a fast pace with both teams keen to attack and it was Atletico, looking for their first derby win since 1999, who enjoyed the better early chances.

Brazilian playmaker Diego supplied Falcao whose shot was parried away by Iker Casillas in the Real goal on nine minutes and ten minutes later the Colombian was millimeters from connecting at close range to a Gabi Fernandez free-kick.

Real were struggling to make any impact when in the 25th minute Ronaldo stepped up to hit a free-kick from around 30 yards.

Thibaut Courtois in the Atletico goal did not react at all to the bending, dipping shot and could only watch as it nestled in the corner of his net.

Karim Benzema then narrowly headed wide a Angel Di Maria cross on 32 minutes but it was Real Madrid who went into the half-time break the stronger team.

Within ten minutes of the restart however Atletico were level when Falcao evaded Sergio Ramos and Fabio Coentrao to powerfully head home an Adrian cross.

Ronaldo put Real back in control on 68 minutes with another swerving shot, this time from the left hand corner of the area, that again left Courtois helpless.

Falcao headed high a Juanfran cross and Adrian burst through Real's defense to be denied by a last minute block as Atletico pushed to level the game a second time.

As the home team pushed forward the gaps appeared and Gonzalo Higuain won a penalty that Ronaldo converted before Callejon added the fourth with three minutes remaining.

Earlier on Wednesday Valencia temporarily moved back into third position above Malaga with a comfortable 4-1 win over Rayo Vallecano.

Brazilian Jonas Gonzalez with two, Jordi Alba and Pablo Hernandez got the goals for the home team, with Diego Costa getting a consolation for Rayo.

Malaga go to Villarreal on Thursday knowing a win would send the Andalusian side back above Valencia into third.

Levante missed the chance to also move ahead of Malaga after a 3-2 defeat to struggling Sporting Gijon in a pulsating clash.

Substitute Gabriel Sangoy got the winner with six minutes remaining to give the north-coast club a priceless victory that keeps their hopes alive of avoiding the drop.

The result leaves Sporting on 28 points, four behind Villarreal and safety.