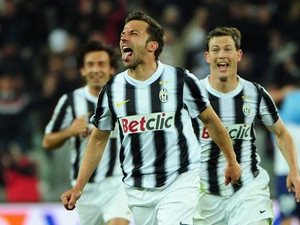 Alessandro Del Piero rolled back the years with a peach of a goal to hand Juventus a 2-1 win over Lazio on Wednesday and keep the Turin giants top of Serie A.

The pressure was on following AC Milan's labored 1-0 win at Chievo the night before but Juve responded with a crucial, late victory to go one point clear at the summit.

Simone Pepe had given the hosts a first half lead before Stefano Mauri equalized with Lazio's only meaningful attack of the game.

But veteran Del Piero proved the hero with a trademark free-kick.

"We fought to the end. Neither us nor (Milan) will let up. We're in good shape and we're thinking of the next match," enthused the match-winner.

Juve coach Antonio Conte was elated with the win but still riled by previous missed opportunities.

"There's definitely a bit of bitterness for the game we dominated but didn't see out this year, against Genoa, Chievo, and Cagliari, all games in which we failed to deliver the knock-out blow," he said.

The first half was about as one-sided as 45 minutes of football can be but Lazio somehow sneaked into the break on level terms.

The visitors' goalkeeper Federico Marchetti was the star of the show making a string of vital saves.

Fabio Quagliarella should have opened the scoring early but he failed to turn home Giorgio Chiellini's cross from six yards.

Marchetti was then deceived by a bounce but Quagliarella's shot hit him in the face and rebounded to safety.

Juve were in total control and Arturo Vidal played Pepe in behind the backline, but Marchetti saved low to his right.

The pressure told on the half hour mark as Andrea Pirlo's delightful chip sent Pepe clear and with his back to goal he controlled the ball on his chest and then sent an acrobatic overhead bicycle kick past the goalkeeper.

Vidal tried his luck from 60 yards, spotting Marchetti off his line, but the goalkeeper scrambled back to tip the ball over.

Modibo Diakite then dived in to block what seemed a certain goal for Mirko Vucinic before Marchetti stuck out his left hand to stop Quagliarella's deviated shot.

But then right on the stroke of half-time, Lazio took a quick free-kick and Mauri headed Lionel Scaloni's pinpoint cross into the top corner.

Juventus were straight back on the attack after the break but although Vucinic beat Marchetti, his shot fizzed past the post.

Chiellini had a glorious chance when set up by Stephan Lichsteiner but the big defender didn't have quick enough feet to turn the ball goalwards.

But eight minutes from time Del Piero wrong-footed Marchetti, who seemed unsighted, with a free-kick from 25 yards out to send the home fans into ecstasy.

In other games Inter Milan boosted their European qualification hopes with a 2-1 win over Siena to maintain coach Andrea Stramaccioni's unbeaten start as boss.

Diego Milito scored a brace to move up to third in the Serie A scoring charts following Gaetano D'Agostino's opener.

Inter are now behind Napoli in the final Europa League spot only on head-to-head record after Walter Mazzarri's men fell 3-1 at home to Atalanta.

Roma beat Udinese 3-1 thanks to late goals from Francesco Totti and Marquinho to boost their Champions League hopes.

They now trail third-placed Lazio by four points in that race with Udinese a point ahead of them.

Lecce continued their unlikely bid to escape the drop as they scored twice in the final two minutes to win 2-1 at Catania, although they are still two points from safety despite being unbeaten in their last five.