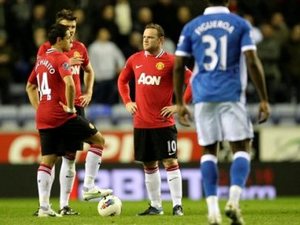 Struggling Wigan breathed life into the Premier League title race with a stunning 1-0 upset of Manchester United on Wednesday as Manchester City romped to a 4-0 win over West Bromwich Albion.

Just days after United looked to have assured themselves of a 20th league crown by opening up an eight-point lead over City, Shaun Maloney's 50th-minute winner for Wigan suggested the title race may yet have more twists in store.

City's emphatic win over West Brom at Eastlands reduced United's lead at the top to five points with five games remaining, meaning Sir Alex Ferguson's side have little margin for error in their remaining fixtures.

United -- who must travel to City on April 30 -- looked sluggish throughout as Wigan claimed a precious three points that lifted them out of the relegation zone at the expense of Bolton.

United were fortunate not to fall behind after Wigan appeared to have taken the lead through Victor Moses midway through the first half, only for the goal to be ruled out for a foul on United goalkeeper David de Gea.

But United were not so fortunate on 50 minutes when Wigan took the lead with a magical strike from Maloney, curling a superb shot beyond De Gea after a clever short corner routine.

"It was a disappointing night for us, we were second to every ball in the first half and we were completely dominated by Wigan," Ferguson said.

"It was one of those off nights that you sometimes get in football."

The United manager was also critical of referee Phil Dowd but added: "That doesn't take away from the fact that Wigan were the better team and deserved to win."

Ferguson added: "It's important to win our home games now. We'll improve from this performance, I'm sure of that.

"We wish our lead was better but considering where we were a couple of months ago we have to accept that somewhere along the line you will drop points. I said that weeks ago.

"In our history we've never taken a point from United and we restricted them to one shot on target. The players deserve a huge amount of credit. It shows how well they have been working. It's a historic day for us," Martinez said.

Meanwhile City bounced back from the disappointment of Sunday's 1-0 defeat at Arsenal with a drubbing of West Bromwich Albion which included a goal for returning bad-boy Carlos Tevez.

Sergio Aguero opened the scoring for City after only six minutes, sweeping in past Ben Foster after evading the attentions of Keith Andrews.

Aguero then grabbed his second shortly after half-time, applying the finishing touch after neat inter-play between David Silva and Samir Nasri.

Tevez then made it 3-0 from Aguero's cut back on 61 minutes and City then piled on the misery for the Baggies as Silva added a fourth three minutes later.

But City manager Roberto Mancini played down his side's chances of overhauling United, insisting the title race was over.

"The title race is finished because United is a fantastic team and they have a fantastic spirit. I think five points is too much," Mancini said.

Elsewhere, Arsenal tightened their grip on third place and an automatic Champions League qualifying place with a 3-0 win over bottom club Wolves at Molineux.

Arsenal's win saw them take a five-point lead over fourth-placed Tottenham as Wolves slumped to a seventh straight defeat that leaves them nine points from safety.

The match was effectively over as a contest inside the first 11 minutes as Arsenal surged into a two-goal lead and Wolves were reduced to 10 men.

Robin van Persie opened the scoring from the penalty spot after Sebastien Bassong picked up a red card for fouling the Dutchman as he raced in on goal following a one-two with Theo Walcott.

Van Persie then returned the favor on 11 minutes, swapping passes with the England winger as Walcott's shot made it 2-0.

Arsenal had to wait until the 69th minute to add their third, Yossi Benayoun shooting low into the net after good work down the left from Alex Song.

At the other end of the table, Queens Park Rangers boosted their hopes of Premier League survival with an emphatic 3-0 win over Swansea at Loftus Road.

QPR took the lead on the stroke of half-time through captain Joey Barton, the midfielder lashing home from the edge of the area after Swansea failed to deal with a free-kick swung in from the right.

Rangers then took a stranglehold on the contest 10 minutes into the second half through Jamie Mackie, the Scottish international's deflected shot wrong-footing Michael Vorm to make it 2-0.

A 25-yard thunderbolt from Hungarian international Akos Buzsaky made it 3-0 on 67 minutes to seal a win which moved Mark Hughes' side two points clear of the relegation zone.