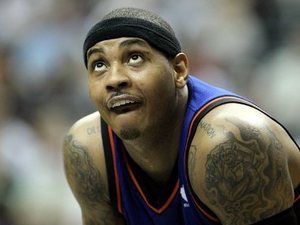 The New York Knicks held off the Milwaukee Bucks 111-107, boosting their NBA post-season hopes with a victory over their closest pursuers in the playoff race.

Carmelo Anthony led the Knicks with 32 points. Tyson Chandler added 19 and J.R. Smith delivered the go-ahead three-pointer with 1:04 to play.

The Knicks improved to 30-28, and moved two games ahead of Milwaukee for the eighth and final playoff spot in the Eastern Conference with eight games remaining.

The Knicks are one game behind seventh-placed Philadelphia in the Eastern Conference and four games behind Boston in the Atlantic Division.

The Knicks have a difficult remaining schedule that includes home games against Miami, Boston and the Los Angeles Clippers as well as a road game in Atlanta.

Philadelphia have just three games left against teams with winning records, but the 76ers end the season on a five-game road trip.

Chandler said the Knicks wouldn't worry about what the 76ers, Celtics or Bucks are doing as the lockout-shortened regular season hurtles to a close.

"It's all about us, honestly," Chandler said. "I don't really care about what other teams are doing because it's all about how we're playing and how we go into the playoffs.

"Obviously, we want a chance at our division. We want to get a high seed. But to me it ultimately comes down to how you're playing when you get in."

Monta Ellis had 35 points and 10 assists for Milwaukee. Brandon Jennings added 22 points and Mike Dunleavy chipped in 19, but the Bucks couldn't hold on to an eight-point fourth-quarter advantage.