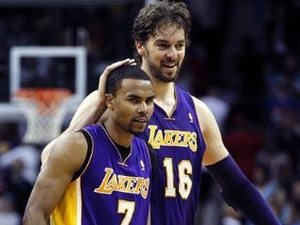 The Los Angeles Lakers did not need superstar Kobe Bryant to beat the San Antonio Spurs 98-84 in the first of three games between the Western Conference rivals in 10 days.

Pau Gasol added 21 points and 11 rebounds for the Lakers, who had six players score in double figures and notched their sixth win in eight games.

The Lakers stayed 1 1/2 games in front of cross-town rivals the Clippers at the top of the Pacific Division.

The Spurs, assured of a playoff berth, remain a game behind Oklahoma City in the West as they suffered a second straight defeat in the wake of their 11-game winning streak.

Danny Green led the Spurs with 22 points. Tim Duncan added 14 points and two rebounds, but Tony Parker was limited to just four points, making a disappointing 2-of-12 from the floor.

The Lakers are now 4 1/2 games behind the Spurs for second place in the West. The two teams are scheduled to meet again in Los Angeles on April 17 and in San Antonio on April 20.