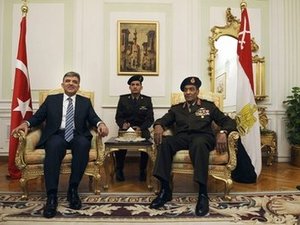 "The Supreme Council of the Armed Forces reiterated its will to manage a democratic transition," Gul told reporters.

He was speaking after talks with the head of the military council and Egypt's de-facto head of state, Field Marshall Hussein Tantawi.

Gul said it was "not enough to have a strong army, there must also be a strong political system and a healthy economic base."

It was his first visit to Egypt since Mubarak was toppled on February 11 after nearly three weeks of nationwide anti-government protests.

As he visited, Egyptian prime minister Ahmed Shafiq resigned unexpectedly following demands from protesters for a purge of the remnants of Mubarak's regime.

"We're in a phase in which Egyptians must act rationally, and should strive to satisfy popular demands during this transitional period," Gul told reporters.

"We have come (to Egypt) to share our experience and our expectations, with sincerity, in these critical moments," he added.

Gul was visiting Cairo in what an aide said was a show of "solidarity with the Egyptian state and people" two weeks after a wave of massive protests forced president Hosni Mubarak to resign after three decades of rule.

Turkey is often cited as an example of how Islam and democracy can co-exist, and Gul was one of the first Muslim leaders to call for Mubarak to step down during Egypt's uprising.

The Turkish leader, whose party was born out of the Islamist movement, was to meet Arab League secretary general Amr Moussa, as well as former atomic agency chief turned opposition figure Mohammed ElBaradei.