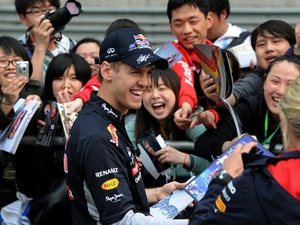 Reigning world champion Sebastian Vettel admitted Thursday he was having problems with his Red Bull, but insisted that his rivals should read nothing into his mediocre start to the season.

The German is going for his third world title on the bounce, a rare feat that would propel him towards the top bracket of all-time racers, all at the tender age of just 24.

But after his and the Red Bulls' supreme dominance of the last two campaigns, he has endured an indifferent start to the new season by his high standards, finishing second in Australia and a lowly 11th in Malaysia.

"Last year I had a better start, but it's only two races so far," he said ahead of the Chinese Grand Prix in Shanghai on Sunday.

"It's not ideal, but the car has a lot of potential, only we have not got to it yet.

"Malaysia was chaotic and things didn't go as planned. The car has different problems (from last year) and bigger problems. But it's only two races.

"The problems this year are very different, maybe bigger," the German said, without going into details.

"We have a very competitive car, we just need to get it working properly," he added.

"When we get this right, we will be in a much better position."