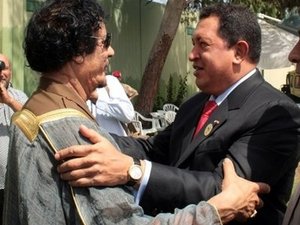 The Libyan opposition on Thursday flatly rejected a mediation proposal by Venezuelan President Hugo Chavez to find a peaceful solution to the crisis in the country, a spokesman said.

"We have a very clear statement. It's too late. Too much blood has been spilt," Mustafa Gheriani, a spokesman for the opposition's self-declared national council set up in the eastern city of Benghazi, told Agence France Presse.

Chavez, an ally of Libyan leader Moammar Gadhafi, on Monday proposed creating an international peace mission with forces from friendly nations to try to mediate the unrest gripping Libya and avoid civil war.

"We will never negotiate with anybody on the blood of our people. The only way we can negotiate with Chavez is if Gadhafi goes to Venezuela (for good).

"Then we'll ask him to have Gadhafi back in Libya to be prosecuted by our justice," Gheriani said.

Chavez said earlier this week that any foreign military intervention in Tripoli would be "a catastrophe" as Western countries mulled military action in Libya where more than 1,000 people have been killed in fighting.

He and Gadhafi routinely make public condemnations of U.S. "imperialism" and have exchanged visits in recent years. Ties are so close that Gadhafi was rumored at one point to have fled to Caracas, before he eventually appeared in public and on television in Tripoli.

A Venezuelan minister said earlier Thursday that the Libyan regime and the Arab League were considering Chavez's proposal.

"We can confirm Libya's interest in accepting this proposal, as well as the Arab League's" interest, Information Minister Andres Izarra told AFP.

"Today Venezuela presses ahead with its agenda in the Arab world and the world at large to seek peace in Libya," he said.

"We are studying the proposal," Arab League chief Amr Moussa told AFP, declining to give any further details on the regional forum's response to Chavez's suggestion.