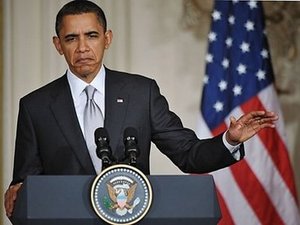 U.S. President Barack Obama said Thursday he is examining the "full range" of military options, including a no-fly zone, if the revolt in Libya turns into a bloody stalemate and humanitarian disaster.

Accusing Moammar Gadhafi of encouraging violence against his citizens, Obama again called on the Libyan leader to stand down for the good of his country.

"We are looking at every option that's out there, in addition to the non-military actions that we've taken. I want to make sure that those full range of options are available to me," he said.

A no-fly zone, which U.S. military leaders have warned would necessarily have to be preceded by U.S. air strikes, "is one of the options that we would be looking at."

Obama said he had authorized the use of U.S. military aircraft to help move refugees who have fled the unrest in Libya, and was sending U.S. teams to the border to help coordinate humanitarian aid efforts.

"I don't want to be hamstrung," Obama said. "I want us to be making our decisions based on what's going to be best for the Libyan people, in consultation with the international community.

"And we are doing that not just here in the United States within our own agencies, but we're also doing it in consultation with NATO," he told a White House news conference with Mexican President Felipe Calderon.

Libyan warplanes struck the town of Brega on Thursday, as a rag-tag army of rebels holding the eastern strategic city manned machine-guns on pick-up trucks after two bombs fell near the local oil refinery.

The attack sparked fears of a new bid by troops loyal to Gadhafi's regime to recapture the key port, 200 kilometers southwest of the main eastern city of Benghazi.

Obama acknowledged: "There is a danger of stalemate that over time could be bloody. And that is something we're obviously considering.

"So what I want to make sure of is that the United States has full capacity to act potentially rapidly if the situation deteriorated in such a way that you had a humanitarian crisis on our hands.

"Or a situation in which ... defenseless civilians were finding themselves trapped and in great danger," he said.

Obama said the United States and the entire world "continues to be outraged by the appalling violence against the Libyan people."

"Let me just be very unambiguous about this. Colonel Gadhafi needs to step down from power and leave. That is good for his country. It is good for his people. It's the right thing to do," Obama stressed.

And he warned that those still loyal to the regime should know "that history is moving against Colonel Gadhafi."

Libya has been rocked by the revolt against Gadhafi's four-decade rule which erupted on February 17 following uprisings in Egypt and Tunisia which ousted their long-time leaders.

Obama said the United States has already moved swiftly to implement "the most rapid and forceful set of sanctions that have ever been applied internationally," freezing some $30 billion of Libyan assets.

But until now there had appeared to be strong differences within the administration over any recourse to military force.

"A no-fly zone begins with an attack on Libya to destroy the air defenses. That's the way you do a no-fly zone. And then you can fly planes around the country and not worry about our guys being shot down. But that's the way it starts," Gates said.

Obama said the immediate priority was to deliver humanitarian aid to refugees and Libyans inside the country who may find themselves facing food shortages if Gadhafi continues to hunker down.

He said he had instructed the U.S. Agency for International Development to send teams to the border with Libya to coordinate with United Nations and international humanitarian relief groups inside the country.

He also said he had authorized U.S. military aircraft to help fly Egyptians stranded on the Tunisian border back home, and civilian charter flights to help refugees from other countries to find their way to their home countries.

A major European operation was under way Thursday to airlift out of Tunisia thousands of people, most of them Egyptian workers stranded at the border.