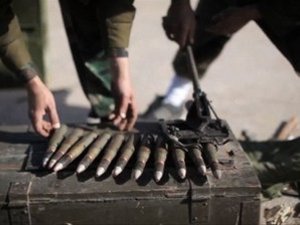 Libyan forces carried out an air strike on the edge of the rebel-held town of Ajdabiya Friday, as opponents of veteran leader Moammar Gadhafi called for fresh protests in the capital Tripoli.

U.S. President Barack Obama said all options were on the table for driving Gadhafi out of power as the strongman's son said air strikes on rebel-held positions were scare tactics rather than to inflict serious damage.

Despite grave reservations expressed by the U.S. military command, Obama said a no-fly zone was among the "full range" of options as he demanded that Gadhafi "step down from power and leave."

Forces still loyal to the veteran strongman, who has ruled the oil-rich North African state for 41 years, have been bombing rebel-held positions in Libya's east and thousands of people are desperate to flee the country.

The latest air strike, early Friday, targeted a military base on the edge Ajdabiya, a strategic crossroads, but caused no injuries or damage, rebels said.

The military barracks on the outskirts of Ajdabiya has been targeted repeatedly by Gadhafi's forces since rebels in the east began a popular uprising on February 15 to evict the Libyan leader.

Rebels managed to beat off a dawn attack on Brega on Wednesday in the first real military battle since the start of the uprising. Another bombing raid was carried out early Thursday but caused little damage.

The patchwork Libyan opposition now controls swathes of eastern and western Libya including the city of Benghazi and some oil installations. Gadhafi remains firmly in control of the capital Tripoli.

Separately there were reports that Libyan state TV had called for protests against any foreign intervention in Libya. There was no immediate confirmation.

More than 100,000 people have left Libya to escape the violence, which has killed at least 1,000, according to conservative U.N. estimates.

The Libya disruption has been a factor in driving up world oil prices, along with unrest against authoritarian regimes across the Arab world.

Crude prices resumed their upward path in Asian trade Friday on doubts about Venezuela's proposal to mediate in the crisis in oil-rich Libya, analysts said.