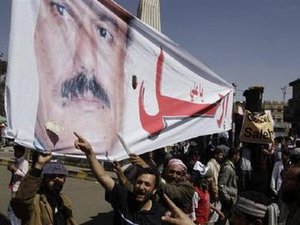 Yemeni soldiers killed four protesters and wounded seven others on Friday when they opened fire on an anti-regime rally in the northern province of Amman, officials and Shiite rebels said.

The shooting, which came a day after the opposition and clerics offered embattled President Ali Abdullah Saleh a smooth exit from power, took place in the village of Semla, 170 kilometers from the capital Sanaa.

"Two protesters were killed and nine others were wounded when soldiers opened fire from a military position on the demonstration calling for Saleh's departure," said the rebel leader, who spoke on condition of anonymity.

The death toll doubled to four later when two of the protesters died of their wounds, according to a local government official who also declined to be named.

It was also reported on the rebels' news website almenpar.net, which said the troops "killed and wounded dozens" when they shot at them from a position inside Semla.

The protesters had taken to the streets of the nearby town of Harf Sufyan to criticize corruption and call for a regime change after 30 years of rule by Saleh, said the website.

Saleh's government has been rocked by a wave of protests in which at least 19 people have been killed since February 16, according to an AFP toll based on reports and witnesses.

The protests have been inspired by uprisings in Egypt and Tunisia that forced the resignations of their respective longtime leaders, Hosni Mubarak and Zine El Abidine Ben Ali.

Last week, the embattled Yemeni president vowed to defend his three-decade regime "with every drop of blood," accusing his opponents of hijacking protests in a ploy to split the nation

He also accused his opponents of trying to revive secessionist efforts which sparked a short-lived civil war in 1994 that ended with the south being overrun by northern troops.

Protests which have been focused in Sanaa and the southern city of Aden, where 12 people have been killed in anti-government protests since February 16, have also spread to the north.

Yemen's mountainous northern region is stronghold of the Zaidi rebel movement, which from 2004 fought six wars with Saleh's government before signing a truce in February 2010.