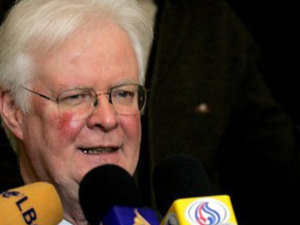 U.N. Special Coordinator for Lebanon Michael Williams expressed hope on Friday that the government formation process “would not overshadow the issues that affect the daily lives of Lebanese people, especially in the field of security.”

“I expressed my belief as the U.N. Special Coordinator that any new government should try to meet the aspirations of all the Lebanese people,” Williams said following talks with caretaker Interior Minister Ziad Baroud.

“I commended the minister and the ministry for their efforts to promote a secure environment for all Lebanese,” Williams said.

He added that both men discussed the domestic situation in Lebanon and the dramatic developments in the Arab world in recent days.