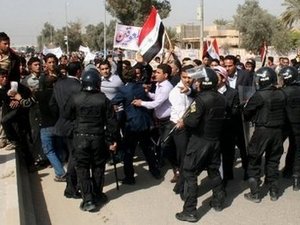 Thousands of protesters massed in cities and towns across Iraq after streaming in on foot on Friday in defiance of vehicle bans for rallies over corruption, unemployment and poor public services.

The demonstrations were markedly smaller than similar protests which took place in more than a dozen cities a week ago, spurring Prime Minister Nouri al-Maliki to give his cabinet 100 days to shape up or face the sack.

On Friday, a crowd that rose to around 2,000 in number descended on Baghdad's Tahrir Square, while 1,500 gathered in the northern city of Mosul and 1,000 rallied in the southern cities of Nasiriyah and Basra.

Overall, protests took place in at least 10 cities nationwide, though heavy vehicle restrictions were placed on all non-Kurdish provinces north of Baghdad and in several cities, planned protests were disrupted.

In the capital, protesters, mostly men in their 20s and 30s, chanted "Liar, Liar, Nouri al-Maliki" and "Oil for the people, not for the thieves," while carrying banners that read "Yes for democracy and the protection of freedom."

The demonstrators were each frisked at least three times before being allowed to enter the area, with dozens of police Humvees lining streets leading to Tahrir Square. Several witnesses told Agence France Presse that, as the day wore on, it became increasingly difficult to enter the rally site.

"We are fighting for freedom and real democracy," said Riyadh Abdullah, 39, who walked for three hours to get to the square from the western neighborhood of Mansour.

"Corruption is also a major problem. We live in a rich oil country like Iraq but you cannot find electricity, you cannot find clean water, there is no infrastructure," said Abdullah, a writer and activist.

"Where are the billions going?" he asked.

"What's wrong? Everything is wrong. Look at the roads, the services -- everything is miserable," he said.

The Baghdad rally eventually petered out when the demonstrators largely dispersed before security forces overran the square, forcing the remaining 200-odd protesters to leave.

Vehicle curbs were applied to all of Baghdad, whose streets were deserted but for a handful of cars attempting to evade checkpoints, and the centre of Basra. Nasiriyah barred anyone from entering.

Hundreds of Iraqis gathered in the central city of Tikrit but were barred from marching, while residents of the town of Samarra were barred even from going to Friday prayers, where demonstrations usually form.

Friday's rallies had been billed by organizers on the social networking website Facebook as a "Day of Regret", to mark one year since parliamentary elections.

It took politicians more than nine months to form a government after the March 2010 polls, and even now several key positions remain unfilled such as the ministers of interior, defense and planning.

Demonstrations have been taking place in Iraq for the past month, with protesters decrying a lack of improvement in their daily lives, eight years after the U.S.-led invasion that ousted Saddam Hussein.

Last Friday, Iraqis took to the streets of at least 17 cities and towns. A total of 16 people were killed and more than 130 wounded as a result of clashes on the day.

The rallies have led to the resignations of four top officials -- three southern provincial governors and Baghdad's mayor.

In response, Maliki told ministers they would be assessed on their performance in the coming 100 days, with "changes" being made based on whether or not they improved.

Despite their breadth, the protests were generally smaller than similar demonstrations a week ago, which one analyst said was due to the fact politicians seemed to have responded.

"The resignations of several governors and the mayor of Baghdad, as well as Maliki's 100-day ultimatum, has led demonstrators to believe that reforms will take place," said Baghdad University politics professor Hamid Fadhel.