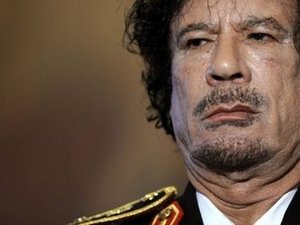 Interpol has issued a global alert against Libyan leader Moammar Gadhafi and 15 others, including members of his family and close associates, the global police organization said on Friday.

Interpol said it issued the Orange Notice "in a bid to warn member states of the danger posed by the movement of these individuals and their assets," following a U.N. Security Council travel ban and asset freeze.

The move is also to assist the International Criminal Court investigation into alleged crimes against humanity in Libya, Interpol said in a statement.

The alert means Interpol's 188 member countries "will be able to take all necessary measures to protect civilians and to enforce travel bans against all 16 Libyan nationals, as well as the assets freeze targeting six of them."

"The individuals subject to the Orange Notice have been identified as being involved in or complicit in planning attacks, including aerial bombardments, on civilian populations."

Interpol Secretary General Ronald K. Noble added: "As a first priority, we must work to protect the civilian populations of Libya and of any country into which these Libyan individuals may travel or attempt to move their assets."