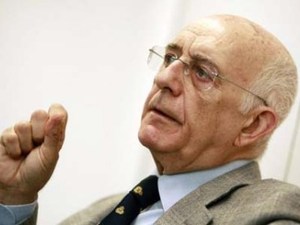 The President of the Special Tribunal for Lebanon, Judge Antonio Cassese, has published the second STL Annual Report, "which outlines the successes of the past year as well as the challenges that the Tribunal has faced," STL's press office announced Friday.

"This has been a momentous year for the STL", said Cassese. "The submission of the first indictment by the Prosecutor (Daniel Bellemare) to the Pre-Trial Judge (Daniel Fransen) was highly significant and it marked the start of the judicial phase of the STL's life."

"The Annual Report provides an overview of the work of all the organs within the Tribunal. Amongst the highlights of the past year has been the intensification of investigations by the Office of the Prosecutor, as well as the submission of an indictment," the press office said.

In his conclusion to the Annual Report, Cassese underlines the challenges "that the STL faces as it continues to fulfill its mandate."

"These include a difficult security environment, as well as the costs of ensuring that our work is both efficient and transparent," Cassese clarifies.

He also outlines his vision for the STL over the coming year, noting his "desire for investigations to be completed and for all indictments to be submitted to the Pre-Trial Judge by the end of February 2012."

"More than 150 missions were conducted and 430 interviews were held, in Lebanon and other States, all requiring extensive preparation and follow-up. Almost 750 requests for assistance were sent to the Prosecutor General of Lebanon from 1 March 2010 to 18 February 2011," Cassese reveals in the report.

"More than 60 requests for assistance were also sent to other States during this period. In addition, numerous meetings were held with the representatives of States and other international organizations on the practical arrangements for cooperation with the OTP investigations."

Cassese noted that achievements were made by the OTP "in spite of the hostile rhetoric against the Tribunal which escalated into clear intimidation and physical violence during the reporting period."

"There has been intimidation of witnesses in a number of ways: commencing in the last quarter of 2010, several calls have been made for a boycott of the Tribunal; public threats have been made to dissuade cooperation with the Tribunal; and unlawful broadcasts of audio recordings of witness interviews made in confidence to the U.N. International Independent Investigation Commission have been aired on some Lebanese television channels," Cassese went on to say.

He said that the broadcasts were aimed at "discrediting the Tribunal and undermining the trust that witnesses have in it."

Cassese stressed in the report that the submittal of a draft indictment to the pre-trial judge does not signal the end of investigations.

"While the filing of an indictment is an important step in the process, it is nonetheless only a first step.

"If confirmed, much more work will be required to ensure that the confirmed indictment meets the 'beyond a reasonable doubt' threshold required at trial. The investigation will also continue in order to identify other persons responsible for the attack," STL's president clarified.

The investigation will continue, as well, "to be able to establish the truth about other attacks falling within the jurisdiction of the Tribunal," he added.

"The whole of the Tribunal, including the President, is fully aware that the confirmation and eventual publication of indictments may have significant repercussions in Lebanon – this is to be expected when judicial process is applied to what the Security Council has termed 'a threat to international peace and security,'" Cassese says in the report's final observations.

"It is no secret that there still exists much debate in Lebanon and elsewhere about the usefulness of the Tribunal. However, as international civil servants working for an international judicial institution and, in particular, as independent Judges, we are under the obligation to refrain from taking political considerations into account."

Cassese noted that those who "still entertain so many doubts and misgivings about the Tribunal do not pay attention to the fact that so far the Tribunal has already furnished ample proof of its professionalism, impartiality, and independence."

"It may suffice to recall the independence with which the Tribunal immediately ordered the release, owing to the lack of evidence against them, of four Lebanese generals being detained in a Lebanese prison, and upheld (Maj. Gen. Jamil) Sayyed's effort to seize the Tribunal of his request about the documents to which he seeks access," Cassese reminisced.

STL's first indictment, filed by Prosecutor Bellemare on January 17, is widely speculated to name Hizbullah. The indictment must be confirmed by a pre-trial judge before any arrest warrants can be issued.

"This is a considerable task, requiring a small team to carefully study the indictment and thousands of pages of supporting material," Cassese said.

"The review of the indictment may take a little longer than we had originally hoped, but the pre-trial judge and his staff are working as expeditiously as possible."