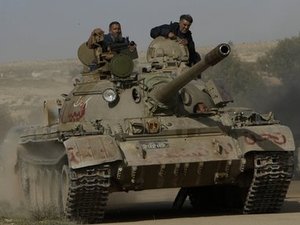 Forces loyal to Libyan leader Moammar Gadhafi were battling rebels on Friday for control of the town of Zawiyah, near Tripoli, in heavy fighting that has left "many dead," witnesses said.

State television said Gadhafi's forces had wrested control from the rebels of the middle-class dormitory town 60 kilometers west of Tripoli but a government official said "pockets of resistance" remained.

A local militant politician in the town vehemently denied the television report and said opposition forces were still in control of the town.

"A number of people have been killed and wounded but I can't give numbers," a resident reached by telephone told Agence France Presse.

Local resident Mohammed Qassem said in a live interview on Al-Jazeera television that the town had been surrounded by pro-Gadhafi forces and three people had been killed in fighting there.

British television channel Sky News said its reporter in Zawiyah too reported that the town was circled by loyalist forces.

"This town is under siege; it's been encircled by the army," reporter Alex Crawford said in a report shortly after 1700 GMT.

In an earlier report from a hospital in Zawiyah, she said at least three people had died and there were up to 50 people wounded, seven of them critically. Two children were among those hurt.

"We were walking with the anti-Gadhafi protesters through the main street of Zawiyah, there were several thousands of them, the bulk of them unarmed," she said.

"The town has been circled by army, you have to go through a number of checkpoints to just get inside."

She said the protesters "were marching towards the military lines when the army opened fire using tanks, weapons. They fired several times, repeatedly at the protesters and they also used machine-gun fire".

"A number of the protesters were hit and we're now in the hospital where a number of them have got bullet wounds to the back. Several ambulances were called and they were fired on as well," she said.

Libya's Channel One had said earlier that "the people of Zawiyah and the heads of the popular committees have made Zawiyah safe from the armed terrorist forces."

Channel Two said government forces were in control of most of the city and that 31 tanks, 19 troop carriers and other weapons including rocket-launchers and anti-aircraft guns had been seized from the rebels.

The reports said the "leader of the terrorist group" in the town, named as Hussein Darbuk, and his deputy had been killed and other leading rebels captured.

As dusk fell, Giant Chinook helicopters flew out of Tripoli and lumbered westwards towards Zawiyah, an AFP correspondent in the city said. The Libyan army has several of the tandem-rotor helicopters which can transport up to 50 soldiers.

Three Chinooks could be seeing flying westward, while three others were returning to Tripoli.

In a speech on February 24, Gadhafi accused residents of Zawiyah, which is home to a number of pro-Gadhafi military officers and the site of the country's largest oil refinery, of siding with al-Qaida leader Osama bin Laden.

"You in Zawiyah turn to Bin Laden," he said. "They give you drugs."