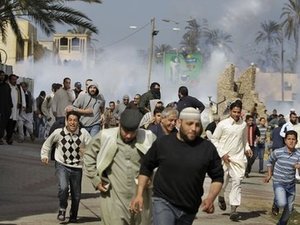 Some 100 anti-Gadhafi demonstrators clashed with police in the Tajoura neighborhood in eastern Tripoli after Friday prayers, a witness said, while another said opponents and supporters of the regime traded blows near the capital's Green Square.

Police fired in the air and sealed off the area but did not intervene otherwise, the second witness said.