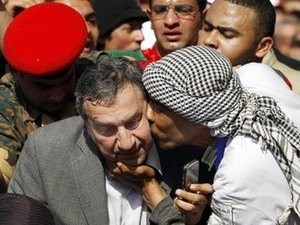 Egypt's new Prime Minister Essam Sharaf vowed on Friday to respond to demands for democratic change as he addressed thousands of protesters in Cairo's Tahrir Square a day after his appointment.

"I am here because I draw my legitimacy from you ... I will exert all my effort to respond to your demands," Sharaf told flag-waving supporters in the square, the center of protests that toppled president Hosni Mubarak last month.

The premier was named by the country's new military rulers on Thursday to replace Ahmed Shafiq, who was opposed by protesters because he had been appointed by Mubarak in the dying days of his regime.

Sharaf, who was born in 1952 and served briefly as a transport minister under Mubarak, had joined protesters in Tahrir Square during the uprising to demand political and economic change.

And in a rare move for an Egyptian official, he appeared in Tahrir Square Friday shortly before Muslim prayers, to be greeted by raucous cheers.

Some formed a human tunnel to allow him to walk through the crush of supporters.

Repeatedly interrupted by chants of "We are with you", Sharaf pleaded with the crowd for patience as he began the work of heading a transitional caretaker government.

"I beg you, you did something great and together we will do more," he said. "I have a heavy task and it will need patience."

Sharaf's appointment was likely to placate protesters, who had continued to rally in Tahrir Square to demand that the cabinet be purged of old regime elements including Shafiq.

Mubarak, 82, stepped down on February 11 after three decades in power.

Sharaf's appointment is "a good step but we still have demands. We want the detainees to be released," Omar Ahmed told Agence France Presse from Tahrir Square.

Ahmed Adel, another protester, said "we are ready to give him time, but we will keep pressing for our demands."

Scores of people were detained during the deadly protests that led to the overthrow of Mubarak. At least 384 people were killed and more than 6,000 injured in 18 days of riots.

Sharaf paid tribute to all those who participated in the uprising and saluted "the martyrs of the revolution, the thousands who were injured and the families of the victims."

The Supreme Council of the Armed Forces, which took power after Mubarak's resignation, has pledged to oversee a transition to a free democratic system.

On Friday, a referendum on constitutional changes was set for March 19, the cabinet said on its website.

Egyptians will also vote on removing the president's right to order a military trial for civilians.

Friday's protest, which had originally been organized to press for further change, turned into a massive celebration following news that Shafiq had resigned.

Sharaf's speech was interrupted once more when protesters chanted in unison "The people want the end of the state security," a branch of the interior ministry long accused by rights groups of crushing dissent through torture.

"I pray that Egypt will be a free country and that its security apparatus will serve the citizens," Sharaf said.

Then echoing the signature chant when Mubarak resigned, Sharaf told the adoring crowd: "Lift your head up high, you're Egyptian," before being carried on supporters shoulders out of the square.