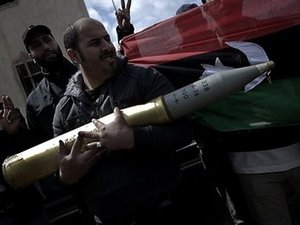 At least 17 people were killed Friday when a huge explosion ripped through a military weapons depot outside Benghazi, the main city held by Libyan rebels fighting Moammar Gadhafi.

Dr. Habib al-Obeidi in Benghazi's al-Jalaa hospital said the blast also hit a residential area. Witnesses on the scene, about 32 kilometers from downtown, said ambulances were rushing to the area and secondary explosions caused two fire trucks to blow up.

The cause of the blast was unclear. Obeidi said it apparently was triggered when people went into the storage facility to collect weapons, but others blamed pro-Gadhafi forces for triggering the blast.

Residents living around 10 kilometers from depot reportedly felt the impact of the blast.

"We have a huge explosion in a weapons depot. We don't know if it was an air strike or sabotage," said Mustafa Gheriani, a spokesman for the rebels' national council set up in Benghazi, Libya's second largest city.

"The whole town shook," he added.

Residents said the military base is the main warehouse for weapons storage in the area.

Rebels rising up against Gadhafi following revolutions in neighboring Egypt and Tunisia control much of eastern Libya and have made Benghazi their de facto capital in the fight against regime loyalists.

Although the cause of Friday's blast was unclear, pro-Gadhafi forces have carried out air strikes targeting military bases overrun by rebels in the fight to reclaim fallen territory.