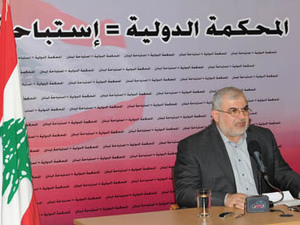 The March 14 coalition snapped back at Hizbullah MP Mohammed Raad saying his statement “restricts the freedom of movement of Premier-designate” Najib Miqati.

“Do the March 8 forces want the Miqati government to be really formed or they prefer to keep the status quo?” a March 14 official asked.

The official hinted in remarks published in An Nahar on Saturday that March 8 was waiting for a clearer picture in the developments in the region to form a cabinet.

Raad called during a press conference he held on Friday for Lebanese authorities not to cooperate with the Special Tribunal for Lebanon and freeze the memorandums of understanding with the court’s agencies.

He said STL Prosecutor Daniel Bellemare’s requests from four caretaker ministers for information and documents contradicted with the cooperation protocol signed between Lebanon and the international tribunal and violated Lebanese sovereignty.