Officials: No Need for U.N. Action Under Chapter 7 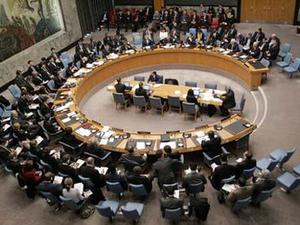 Officials who have met with U.N. diplomats told An Nahar daily in remarks published Saturday that the Security Council is not mulling any action against Lebanon under Chapter 7 of the U.N. Charter.

Two senior March 14 coalition officials also said there was no need to resort to Chapter 7 because the provisions of the Special Tribunal for Lebanon would eventually be implemented without the use of force.

“There is no party that has the desire or ability to go to the U.N. Security Council to have a resolution issued under Chapter 7 to secure the implementation of the international tribunal’s decisions,” MP Ammar Houri told The Daily Star.

March 14 General Secretariat coordinator Fares Soeid also said his coalition was confident that the STL’s requirements would eventually be implemented even if March 8 forces escalated the situation in an attempt to block the tribunal’s work.

“There is no need to go to the United Nations. The tribunal is moving ahead 100 percent,” Soeid told The Daily Star. “The March 14 coalition, which has 60 lawmakers, is committed to democratic and peaceful means to implement the tribunal’s decisions.”

The officials made the comments after Premier-designate Najib Miqati warned that some Lebanese parties were seeking international help under Chapter 7 which allows the Security Council to "determine the existence of any threat to the peace, breach of the peace, or act of aggression" and to take military and nonmilitary action to "restore international peace and security.”